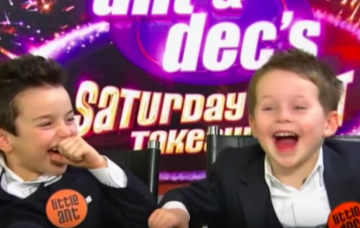 Sad news from ITV, as they confirm little Ant and Dec won’t be returning for this series of Saturday Night Takeaway.

Neil is moving up to high school and Haydn is set to take his SATs next year, so the pair are going to focus on their studies.

Fans have reacted with sadness to the news, writing on Twitter: “Oh no! That’s a shame, love those two!”

Another added: “They weren’t used as much last year, so it isn’t a surprise and of course this is going to happen.

“They can’t be little Ant and Dec for long, they do get older and taller, but it is sad and they will be missed from the show.”

The pair have spent five years on the ITV show, which is presented by Ant McPartlin, Declan Donnelly and Scarlett Moffatt.

In that time, they’ve interviewed everyone from Mila Kunis to Gerard Butler.

At least their final appearance on the show was an epic one.

The pair travelled to Disney World in Florida last summer, where they went on the rides, ate ice creams, met characters, got their faces painted, and tried on Mickey ears.

Neil and Haydn are actually the second versions of Ant and Dec. For ten years from 2003, little James Pallister and Dylan McKenna-Redshaw played the Geordies.

Sadly, ITV have decided not to replace the characters, but an insider said that decision could change.

Meanwhile, it was confirmed that the ever-popular Scarlett, 27, would definitely be returning for the new series of Saturday Night Takeaway.

Ahead of the first episode, the I’m A Celebrity… Get Me Out of Here winner told OK! magazine: “Kylie Minogue is performing on the first show. It’s going to be fun!

“It’s like a big family at ITV, with Ant and Dec and Stephen Mulhern, hair and make-up – everyone. Every week I learn something new.

“Anything can happen on live TV so you just take it as it comes. It’s like university for TV!”

How devastated are you by this news? Leave us a comment on our Facebook page @EntertainmentDailyFix and let us know what you think!