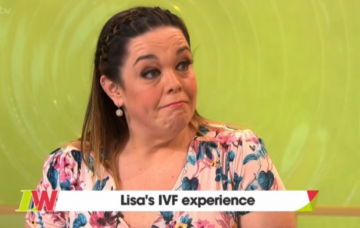 She said she's okay with not being able to have children

Lisa Riley opened up about her experience with IVF on Wednesday’s Loose Women.

The 41-year-old actress told her fellow panellists that during the IVF process, she had been an “absolute wreck” and the experience made her realise that it’s okay to not have a child.

Lisa said that after seven months of failing to conceive, she made the decision to move on with her “fantastic” partner Al.

Read more: Lisa Riley told IVF is unlikely to work for her

The Loose Women had been discussing whether women should feel obligated to talk about their IVF process.

Revealing how she felt about telling people she was going through IVF, Lisa said: “Whatever the female wants to do, it’s completely fine.

“But for me personally, I didn’t want to tell anybody at all. I didn’t even tell you guys at work.”

Lisa revealed she would leave the show and go straight to her IVF specialist to have her scans and injections.

Talking about her low moments during the process, Lisa said: “I was an absolute wreck. You know how confident I am. A tin of beans fell out the cupboard and it was the equivalent of losing my mum. I was crying and crying.”

The former Emmerdale star explained that she put on weight due to the hormones she was taking and that “really played with” her head.

“I went through it all,” she continued. “My other half was unbelievable and I can’t thank him enough because it does mess with your head and you’re pumped with emotions.

“My [egg] readings were completely rubbish and I tried [IVF] for seven months but it’s not for me.”

“I kept it quiet and I decided I’m moving on, so now I’m going to tell people about it,” she added. “I’m a woman in a fantastic relationship and it’s okay to not have a child and I can move forward with that.

“All my girlfriends have got families, and I am godmother to some of them. You think, ‘Am I fulfilled? Have I done everything?’ But I have a lovely life and I am blessed with that.”

Last month, Lisa revealed that doctors had told her that IVF would unlikely work for her.

Lisa told The Mirror that finding out she was unlikely to conceive was a “blow” but she “refuses to be defined” by not having children.

“We have decided now that we aren’t going to go down that route, and now that we have made that decision I could not be happier,” she said.

“I absolutely adore being an auntie and I don’t need a child of my own to complete my picture.”