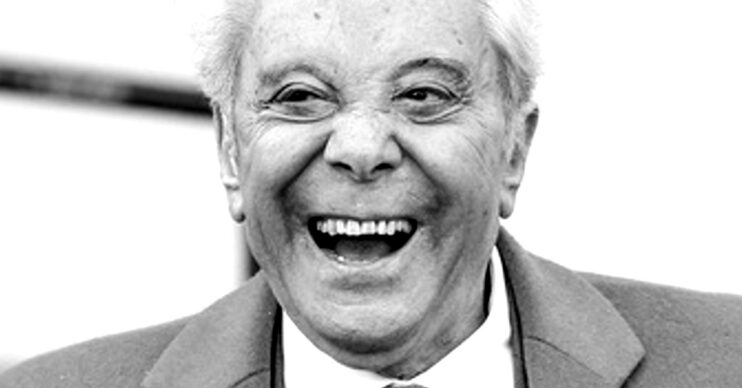 The megastar became beloved for his TV presenting roles

Legendary TV star Lionel Blair has died at the age of 92.

The presenter and personality, known for shows including 80s gameshow Give Us A Clue, leaves behind a stunning lifetime’s worth of work in the entertainment industry.

His agent confirmed the news in a statement that read: “He got to a very ripe old age, he was loved by his family, and I think he died in their company, which is lovely.”

He is survived by wife Susan, three children, and three grandchildren.

Born Henry Lionel Ogus on December 12, 1928, the star was two years old when he emigrated to the UK with his family from Canada.

During World War II, Lionel performed skits in air raid shelters with his sister Joyce to lighten the mood.

The family eventually got evacuated to Oxford, before their return home to Stamford Hill.

In 1944, Lionel joined the Royal Shakespeare Company, and made his debut on the West End.

He officially changed his name by deed poll to Lionel Blair in 1967. Shortly afterwards, he married wife Susan Davis.

They remained together for the rest of his life, celebrating their 50th anniversary in 2017.

As his passion for the arts developed, Lionel moved away from acting and more towards a love of dance.

His big break came in the 1960s, where he became a featured dancer for major television variety shows and films. This includes a spot on The Beatles’ movie, A Hard Day’s Night, in 1964.

During his career, he worked alongside Peter Sellers, Phil Silvers and Bob Hope, as well as singers Ella Fitzgerald and Peggy Lee.

In 1979, he made his debut as one of the team captains on game show Give Us A Clue, and he remained in the role until the 90s.

During the 80s, he hosted pop music game show, Name That Tune.

Since then, Lionel became a familiar face on TV, appearing on reality shows and celebrity specials of fan favourites including Catchphrase.

In 2006, he and comedian Alan Carr saved the life of a man attempting suicide on the Blackpool pier. He described the moment as one of the most terrifying of his life.

After appearing in Ricky Gervais series Extras, portraying an over-the-top version of himself on Celebrity Big Brother, Lionel actually entered the house in 2014.

Joining the show handcuffed to Made In Chelsea’s Ollie Locke, he was the third evicted housemate that series.

In his later years, Lionel largely featured in limited series and reality shows, including 2017’s The Real Marigold Hotel, and 2019’s Hard To Please OAPs – where he and a group of celebs attempted to learn new technology.

He also made frequent appearances on Loose Women, and became a pantomime mainstay.

This story is currently being updated.