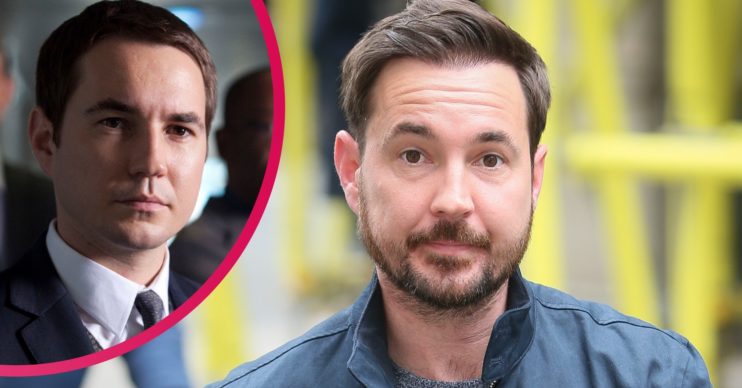 Line Of Duty favourite Martin Compston suffered an unfortunate accident during his first proper night out since the coronavirus lockdown came into effect.

The DS Steve Arnott actor, 36, shared a picture of a rather damaged bush on Instagram and told fans he had tried to use it like a “wrestling ring” after a visit to a beer garden – but ended up going “right through it”.

What did Line Of Duty actor Martin Compston say?

Martin told his followers the wild night out ended in him dancing his heart out before making the ill-fated decision to bounce against a hedge. Afterwards, he could only apologise to his poor back for what he had put it through.

Ahead of the first episode of Line Of Duty airing on BBC One on Monday (August 3) evening, the Scottish star posted a picture of a shrub with a huge hole in it.

First beer garden in 4months ended in dancing to @gbxanthems paramore and trying to use a bush as a wrestling ring, instead of bouncing back I went right through it. I’ve apologised to the bush @tianna_flynn and my back. I’ll learn move forward and see a beer garden next summer. Line of Duty series one tonight at 9pm on BBC1

He captioned the photo: “First beer garden in four months ended in dancing to @gbxanthems paramore and trying to use a bush as a wrestling ring.

“Instead of bouncing back I went right through it. I’ve apologised to the bush @tianna_flynn and my back.

I’ve apologised to the bush.

His followers found it hilarious, with one laughing in the comments: “Only you could do that.”

Someone else joked: “Haha GBX and alcohol are two main ingredients for #hedgejumping.”

A third wrote: “It’s been a while, you’re allowed to let your hair down. The bush may feel differently though.”

Line Of Duty reruns on BBC One

As the first series of Line Of Duty started on BBC One last night, panicked fans thought they were missing the premiere of the new series.

People eager to revisit the earlier episodes – as well as telly fans new to the popular cop drama – tuned in to watch. Many flocked to social media to heap praise on the show.

As a result, it trended on Twitter. And those unaware of the scheduled rerun were in a tizz, thinking it was the postponed sixth series.

Are you watching Line Of Duty on BBC One? Leave us a comment on our Facebook page @EntertainmentDailyFix and let us know.