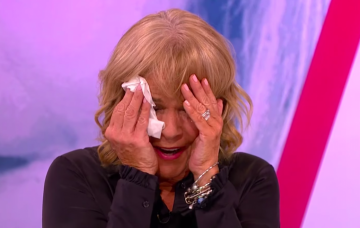 She got drunk as a form of self-medicating

At the height of her anxiety troubles, Linda Robson asked passers-by to buy booze for her.

The 61-year-old actress has revealed she used to plead with strangers to buy her alcohol when she was locked inside her house by her family, after she started self-medicating.

The Loose Women star told The Sun on Sunday newspaper: “I’d find money and say, ‘Excuse me, I’ve lost my key and can’t get out would you be able to go and get me a little bottle of vodka from round the corner?’

“And a couple of people did. But one day, I asked a man to do it and he turned out to be from an alcohol crisis place that my family had called to come and help me.”

Linda – who is now in recovery – has now admitted to putting her family “through hell and back”.

She said: “I can laugh about it now, but at the time, I was putting my poor family through hell and back.

“I was just blacking out all the time. I had always been able to pick my grandchildren up but suddenly I couldn’t be trusted to do that any more because I might be drunk.”

The TV star also recalled going to a supermarket with a nurse, admitting she started drinking from a bottle of rum when the nurse’s back was turned.

I can laugh about it now, but at the time, I was putting my poor family through hell and back.

She shared: “I asked for vodka and they said they didn’t have it, so I pointed at a bottle of rum and said I’d have that instead.

“The woman handed it to me, so I opened it and started to knock it back in the shop whilst members of the public watched.

“I’d already necked half of it by the time the security guards came over and grabbed me, and the poor nurse was saying, ‘Oh, Linda, I’m never taking you out for a coffee again.’

“We went back to the hospital and she told them what I’d done. I’ve still never paid Marks & Spencer’s for the rum…”