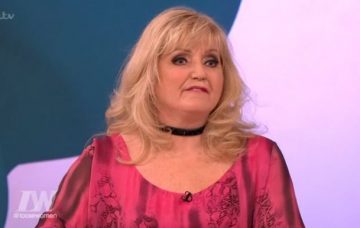 She lost her beloved husband Brian in 2007

Linda Nolan has revealed she’s ready to date again, more than a decade after losing her beloved husband Brian.

The 59-year-old, who was diagnosed with secondary breast cancer last year, told Loose Women that she’d like companionship in her life and someone to watch a movie with or take on holiday.

“I think I am actually [ready to date]. I mean, God help him!” she laughed.

“I haven’t really [had any offers] as I’ve been so anti-dating.”

She added: “I think it’s companionship more than anything.

“I’ve had the love of my life and I know some people don’t experience the kind of love I had with Brian in their lifetime and I’m so lucky.

“It would be nice for me to sit and watch a movie with someone instead of our of the girls or my best friends. To go for a walk or on holiday.”

Linda, who lost husband Brian to skin cancer in 2007, dipped her toe in the dating pool last year when she snogged an old friend who was visiting the UK from Australia.

“I had my first kiss last year and it was fabulous!” she said.

“Bless this poor guy! He’s an old friend and I said, ‘You can kiss me if you like – it will be my first kiss in ten years.’ No pressure! He’s a great friend. He lives in Australia it was the right person at the right time. I became like a 15-year-old again!

“He had asked me for dinner and I went but before I was saying, ‘it’s not a date, though’. The next morning, I went in to work and said, ‘IT WAS A DATE!’ But I just kissed him.”

Her cheeky sister Coleen then interrupted: “Yeah that’s what she says!”

It was just one year ago that Linda discovered she has secondary breast cancer after a fall at her home. She was initially diagnosed with the disease in 2007.

Linda broke her hip in the fall and doctors discovered the cancer had metastasised to her bone.

“It sounds weird to say but this diagnosis has given me a freedom in life that I only do the things I want to do, see the people I want to see. I don’t have to put up with any rubbish as I don’t know how long I will here.”

Linda confirmed plans to have a big party when she reaches her final months, and cheekily claimed she’ll send invites to everyone NOT invited just so they know!

Linda said she doesn’t know how much time she has left and she is “scared to death” about dying.

“That’s why I’m grasping every minute I have,” she said. “They do have women living with this type of secondary cancer for ten or 20 years and hopefully I’ll be one of those.”

Linda said she’s already noticed a difference following the treatments she’s been receiving and her next scan takes place in two weeks.

“I don’t want cancer to rule the time I have left and there’s a danger of that when you need a scan every three months,” she said.

Linda confirmed she will turn down chemotherapy if her cancer does spread, as she watched sister Bernie go through pain and sickness when she opted for the treatment. Bernie died from breast cancer in 2013.

Her new book, From My Heart, is released on Thursday.

Did you watch Linda’s interview on Loose Women? Leave us a comment on our Facebook page @EntertainmentDailyFix and let us know what you think!