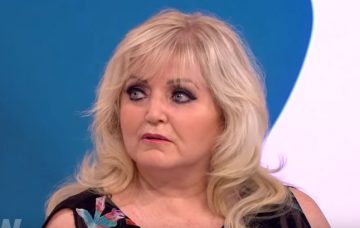 Linda Nolan has opened up about funeral preparations in a heartbreaking new interview.

The former singer and entertainer, 59, who found fame with The Nolans in the 1970s, was diagnosed with secondary breast cancer after a fall earlier this year – 10 years after she was initially treated for the illness.

In an extract from her upcoming autobiography, From My Heart, published by The Mirror, the brave star revealed how she’s already chosen songs for her funeral.

Linda explained that she wants the Faith Hill song, There You’ll Be, from the Pearl Harbor movie, to be sung at her funeral, as it’s the same song that played at her beloved husband Brian’s funeral.

He passed away from skin cancer in 2007.

“The words couldn’t be more fitting for the moment when I’ll finally be going to meet Brian again,” she said.

“It’s the song we played at his funeral. The song we’d jokingly rowed about years earlier as to which of us would have it at our funeral. A row in the days when we thought dying was a million miles away. Goodness, how things have changed.

“And there’s a Neil Sedaka song too, Our Last Song Together. It’s beautiful and by then it really will be our last song with my wonderful family.”

Linda’s autobiography, From My Heart, is available from Thursday.

Her secondary cancer diagnosis came after Linda suffered a fall at her home in 2017. She broke her hip and tests at the hospital revealed the cancer.

She previously explained on Loose Women: “There was a crack because the cancer had eaten through the bone, so the top of the bone had kind of fractured off.

“It’s secondary breast cancer which has metastasised which means the cells have gone into my hip. They could have been lying there for a while and the fall just exacerbated it, I suppose.

“They said it’s not curable but it’s treatable. I remember saying to the nurse, ‘That’s what they told Bernie, though.'”

Her husband Brian passed away in 2007 from the same disease, just one year after Linda was initially diagnosed.

Linda told Loose Women that she’s made decisions about her future based on thoughts about Bernie.

“I obviously think of Bernie every day, everything I’m going through, I think of her. I’ve made decisions because of Bernie. I’ve decided when it comes to the end of my life I want to be in a hospice,” she said.

“Again, because Brian isn’t here I don’t want my brothers and sisters to become my carers. I want them to see me and spend happy times with me at the end of my days.”

Linda, however, told Loose Women: “Touch wood and fingers crossed I have a lot more to achieve… I plan to be around for a long time.

She found out on the show last year that the cancer hadn’t spread and she could start to focus on the future.

“I’m so thrilled, I’m on top of the world. I’m relieved and so happy I have good news to tell my family and friends. I can plan and start thinking about going away again and not worrying about any pains I get. That’s natural, I have painkillers, and I know every three months they’ll see me for a scan,” she said.

“I have to be good to myself and look after myself and look forward now. I can look at my nieces and nephews now and not get upset as there’s every possibility I will see them growing up which is brilliant.

“My final message to cancer is you’re dealing with a tough cookie here. Be careful as I’m going to fight you all the way.”