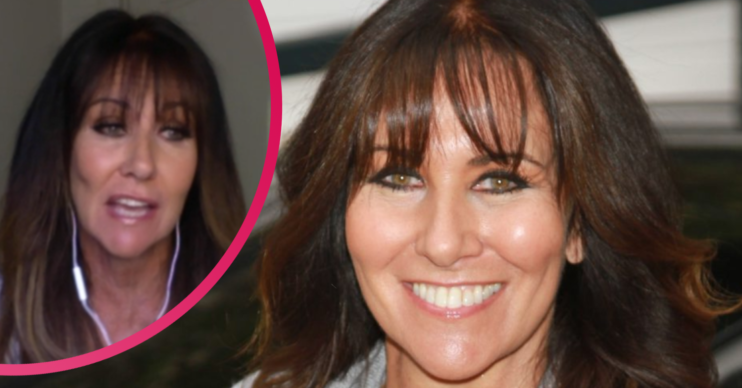 Husband Sam is still suffering side effects, too

Linda Lusardi was reported to be “at death’s door” earlier this year as she battled coronavirus.

Five months on from falling ill, the former glamour model is still suffering from being hit with the killer bug.

Her husband Sam Kane was also hospitalised with coronavirus during the same period.

The 51-year-old actor has been affected by heart issues, which are being observed, following his battle with COVID-19.

However, Linda has also endured upsetting side effects from her 10-day stint in hospital.

She told The Sun that her hair has been falling out in the wake of her illness.

I’ve had some hair loss which has been a bit distressing.

Linda revealed: “Sam’s had heart palpitations quite badly and he’s under a cardiologist at the moment. They can’t see anything specifically wrong.

“I’ve had some hair loss which has been a bit distressing.”

Just wanted to say thank you for all your kind words. My beautiful hubby Sam @toffee1968 went home from hospital today to carry on recovering. We both tested positive with the virus. I still have a way to go yet but I’m holding in there. The NHS staff have been amazing so scary for them on the front line. Their kindness keeps making me cry. Love to you all and keep safe ❤️

However, despite the upset and still not feeling 100%, Linda also added she was hopeful for the future.

That’s because she has noted some improvement in her condition, all these weeks and months on.

Read more: Princess Beatrice celebrates her 32nd birthday with a message from The Queen

She ended up on oxygen and a drip while recovering in hospital.

Linda Lusardi continues to get better

Linda added: “I still haven’t got the energy I had before although I’m getting there. Every week’s a bit better.”

After being allowed home in April, Linda later speculated whether coronavirus could be “man made”.

She said in June: “It’s nothing like you’ve ever experienced before. I’ve had the flu before. To me, it doesn’t feel natural.

“I mean I um and ah over whether it’s man made because it doesn’t feel like anything I’ve ever, ever experienced before.”

She continued: “To be vomiting up blue doesn’t seem normal to me. I think in the next two years we’re going to find out a lot more about it all.

“I don’t feel like it’s a natural thing. If it has come from a bat in a Chinese market then maybe that’s why, but it’s a very odd disease.”

Linda added during the Fubar Radio appearance she had a greater appreciation for living in the moment after being ill.

“It’s made me value my life a lot more and when I first came out I was just elated to just be alive,” Linda said.

She went on: “I felt so responsible for my children… Just the thought that they may not have had us any more was terrifying.

“I think it’s made me prioritise things a bit more and realise that showbiz really, really means nothing.”