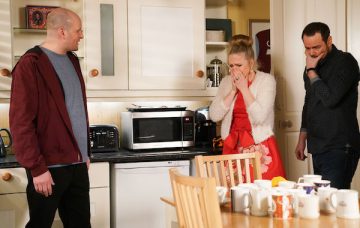 The landlady is less than impressed with her husband

Bubbly Queen Vic landlady Linda Carter gets the shock of her life in next week’s EastEnders when she arrives home from visiting her mum and finds her husband Mick in bed with Hayley Slater.

Read more: Johnny spends the night with Liz in Corrie

Linda is absolutely FEW. MIN. and kicks Hayley out on her ear, telling her to never show her face in her pub again before she confronts Mick.

Mick is confused as – although feeling worse for wear after a day drinking with Stuart and Halfway – he went to bed alone.

He insists to his furious wife that no funny business went on and she eventually believes him.

Linda blames Stuart’s influence on her husband and demands he make him leave at once.

But will Mick be able to turn his back on his old friend?

Mick is disturbed when, as he talks to his childhood mate about what Linda saw, it becomes clear that Stuart set him up for Linda to catch him.

As things started to get rowdy in the pub the night before, with Hayley and Donna almost coming to blows, Mick decided to wrap the night up and headed to bed.

It was then that Stuart slyly told Hayley to go and get in bed with him to get him into trouble with Linda.

His plan certainly worked but will Mick tell his old mate to sling his hook?

What do you think of the Square’s newest arrival? Leave us a comment on our Facebook page @EntertainmentDailyFix and let us know what you think!

EastEnders airs Mondays and Fridays at 8pm and Tuesdays and Thursdays at 7.30pm on BBC One