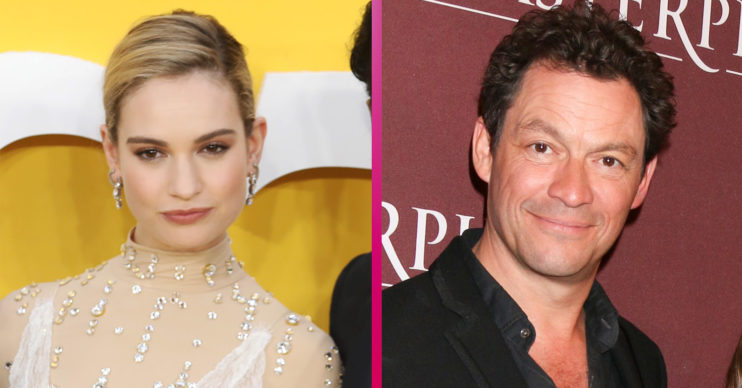 The actress was spotted kissing her co-star in Rome

Lily James has admitted she ‘makes mistakes all the time’ amid her drama with Dominic West.

The actress made headlines recently after pictures emerged showing her kissing her married The Pursuit Of Love co-star in Rome at the weekend.

Since then, Dominic and his wife Catherine FitzGerald put on an united display outside their Wiltshire home on Tuesday.

The couple insisted their marriage is “strong” and kissed outside their home.

What has Lily James said?

In an interview with Harper’s Bazaar, which she did before the photos of her and Dominic emerged, Lily said she thinks it’s “important for us to rebel all the time”.

She said: “It’s important for us to rebel all the time. I think I make mistakes all the time – that’s what life is about.

“I would never want to run away from a situation or be too afraid to act.

“It’s better to throw yourself in and make mistakes with an open heart. You can recover from your mistakes and learn from them.”

What happened between Lily and Dominic West?

At the weekend, pictures emerged showing the co-stars having an intimate lunch in Rome, Italy.

I would never want to run away from a situation or be too afraid to act.

Married Dominic appeared to ditch his wedding ring and is thought to have kissed the Downton Abbey actress.

Lily has remained silent on the photos however, The Affair actor Dominic said his relationship with his wife remains strong.

The couple, who married in 2010 and have four children, held one another and smiled in photos taken outside their home yesterday.

Dominic and Catherine left a handwritten note outside their home.

Read more: Who is Lily James and what happened with Dominic West?

Despite no split being announced, a source told the Mail Online that Catherine has seen the pictures and is “devastated”.

An insider claimed: “Catherine has been trying to speak with Dominic but he’s not answering his phone.

“She’s totally shocked because she didn’t know anything was going on. They were very much together, so this is completely out of the blue.”

ED! has contacted Dominic and Lily’s representatives for comment.