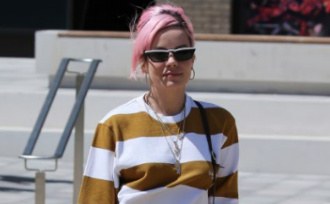 The singer has clashed with the host online (again)

Lily Allen has accused Good Morning Britain of cancelling a planned appearance on the show to promote her new album after she had a war of words with host Piers Morgan on Twitter.

The singer uploaded a video of herself on the social media site on Wednesday night where she explained why she wouldn’t be going on the ITV breakfast show.

Filmed in the back of a car, Lily said: “Hi everyone, so my album ‘No Shame’ is out in a couple of days and we have been putting together my promo schedule.

“The first people that asked me to come on the TV was Good Morning Britain last week. Then this morning, GMB called up my people and said, ‘after Lily and Piers’ Twitter spat, would Lily like to cancel coming on the show?’ To which I replied, ‘No, of course not, what? Do you think I am scared of Piers Morgan?’

“Anyway that message just went back and I just got the news that I was cancelled ’cause Piers don’t want no smoke.”

Piers soon reacted to her video by retweeting it with the reply: “Hi Lily, I told the team I wouldn’t interview you until or if your new album is a hit. So, probably never. Sorry to disappoint, love Piers. x” 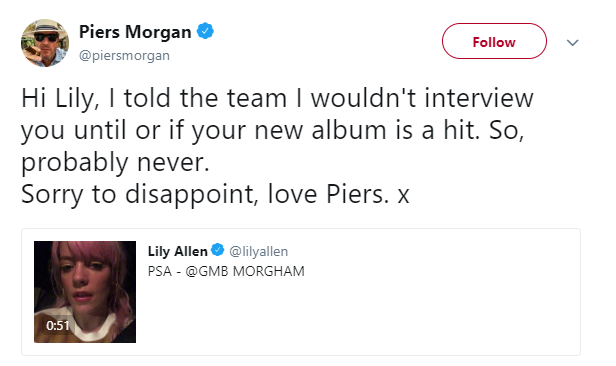 She then hit back: “There would be no incentive to come and talk to you if an album was already a commercial success. That’s not how promotion works. Nice try tho, we all know you’re a [bleep] who can’t back it.”

“Sorry luv, I know you’re disappointed – I’m just not that into you. x,” was how the 54-year-old then responded.

It’s his second spat on Twitter in recent weeks with the 33-year-old mother-of-two.

The other argument, which Lily referred to in her video message, was over a machine gun necklace she has been pictured wearing over the last ten years.

Piers told her she was “reprehensible” for wearing the accessory.

He asked the Londoner: “Why do you wear a machine gun necklace around your neck when gun violence is on the rise in your city?”

Lily replied that she will “stop wearing the necklace when you apologise for hacking the phones of dead children. Deal? Calling me reprehensible for wearing a necklace.”

Piers again replied to tell her “that was another newspaper” as he again challenged her over the necklace.

The former newspaper editor has always denied any involvement in phone hacking and it was a rival paper that was accused of hacking the late Milly Dowler’s phone.

As Piers’ row with Lily escalated, he added further tweets to justify his stance, writing: “I think public figures glamourising gun violence is reprehensible. This shouldn’t be a contentious opinion,” and “sadly, Ms Allen isn’t the sharpest tool in the shed. Probably the bluntest, actually.”

She then hit back again :”If @piersmorgan actually gave an *expletive* about inner city youth violence, he’d spend less time provoking people like me and Raheem and more time lobbying his actual mates,who could do something about cuts to policing and youth services. Necklaces and tattoos are NOT the problem here.” 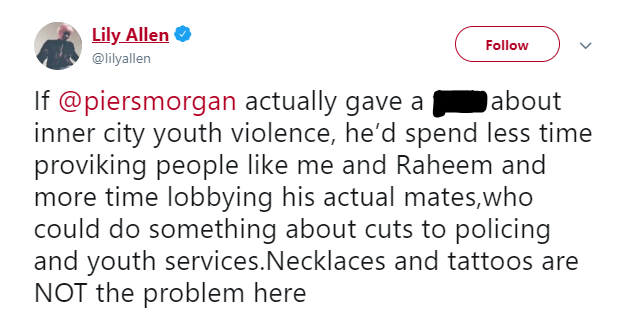 Piers said he regularly did this on GMB but it was “probably too early” for Lily to watch.

He added: “Now, let me try one last time: why are you promoting gun violence by wearing a machine gun necklace around your neck?”

Lily then told him: “I wear the necklace because I like it” before engaging in further swipes with Piers over his past career as a newspaper editor.

Their “debate” ended there until Lily took her more recent shots at the presenter over her cancelled GMB appearance.

She subsequently appeared on ITV’s Loose Women to talk about her new album.