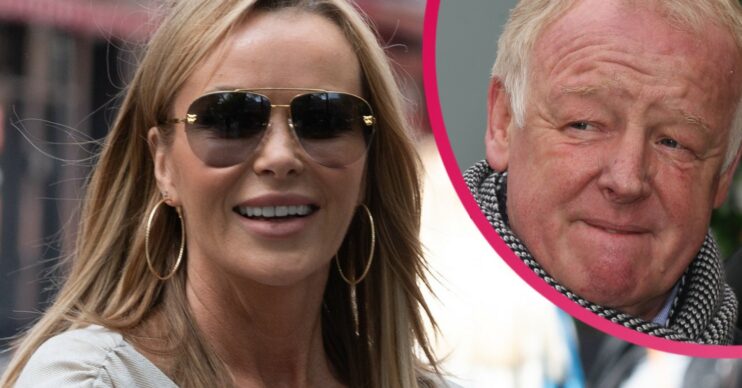 The BGT star almost ended up marriage in 2000

Les Dennis has poked fun at his ex-wife Amanda Holden over her affair.

However, they hit a roadblock when Amanda had an affair with actor Neil Morrissey in 2000.

Their marriage ended up surviving, but they eventually split a few years later.

What did Les Dennis say about Amanda Holden?

During a recent appearance on actor Christopher Biggins’ podcast, Les made reference to Amanda’s shocking affair.

Les, who has previously starred in Xmas pantomimes with American actor Mickey Rooney, said that the star would become aggravated when they would play Frank Sinatra songs.

Les explained:  “Mickey would get very angry because of course, Frank Sinatra ran off with Ava Gardner, Mickey’s wife.”

He then went on to poke fun at Amanda, saying: “It would’ve been like me having to listen to Bob The Builder every night.”

Neil, of course, was the voice of the beloved cartoon character Bob the Builder for 14 years.

What did Amanda Holden say about her affair?

BGT star Amanda embarked on an affair with Neil while they were both starring in BBC show Happy Birthday Shakespeare.

In 2013, Amanda opened up about the incident and blamed herself for it happening.

“I don’t believe women have affairs for no reason,” she told Good Housekeeping in 2013.

“Neil rightly or wrongly got loads of stick. I feel like it was my fault – I was the one who was married.

“I want to change the general perception of him, as he was very caring and very loving and very worried about me because I lost so much weight. He used to cook for me and look after me and babysit the dogs.”

After Amanda and Les broke up, they both eventually went on to find love elsewhere.

Meanwhile, Les married Claire Nicholson and they also have to children together; Eleanor, 13, and 10-year-old Thomas.