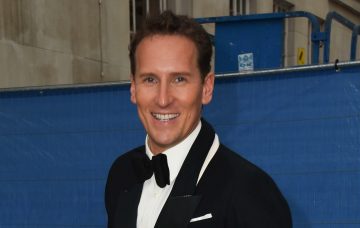 Could the dancer get a job on US telly?

In potentially very exciting news, a new report claims Strictly Come Dancing star Brendan Cole could be in line for a massive new telly job – thanks to his old friend and colleague, Len Goodman.

The Sun reports that Len, the former head judge of the BBC show, is keen to help Brendan, following his shock axing from Strictly last week.

In fact, Len has reportedly put in a good word for him at Dancing With the Stars in the US – where he now works as head judge.

A source claimed: “Brendan is really interested in a move over to LA to appear in Dancing with the Stars.

“It’s a real compliment that they are interested and would be a big two fingers up to Strictly who unceremoniously dropped him.

“He sees it as a fresh start potentially and a way to make a new career for himself.”

Dancing with the Stars is a huge show for US network, ABC. It has been running for a whopping 13 years, since 2005, and airs twice a year.

It has also attracted a variety of big names as contestants across its run, including Kim Kardashian, Kelly Osbourne, Donny Osmond, Pamela Anderson, Nicole Scherzinger and Rumer Willis.

It comes after last week’s shock announcement that Strictly Come Dancing veteran Brendan has been axed from the show.

Brendan, 41, made the emotional revelation on ITV’s Lorraine, telling the presenter: “This is quite hard to talk about.

“The BBC haven’t renewed my contract – we get renewed year on year – and they made an editorial decision not to have me back on the show.

Read more: Strictly’s Shirley Ballas defends herself against accusations she was to blame for Brendan Cole axing

He later revealed that Len, 73, had been in touch over text message to say: “Don’t worry. Bigger and better things will come to you.”

ED! has contacted Len and Brendan’s representatives for comment.