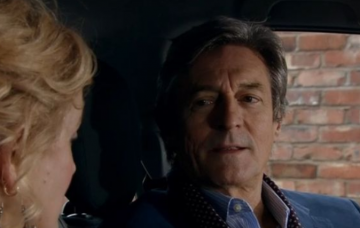 Coronation Street fans are delighted that a legendary villain has made a shock comeback after Pat Phelan was killed off.

Conman Lewis Archer was last seen in 2013 having arrived as a male escort, wooed Audrey Roberts before stealing £40,000 from Gail Platt leaving her heartbroken and almost homeless.

But it seems he isn’t done with Gail and her family as in last night’s episode it was revealed that he was the mystery man behind fake psychic Rosemary Piper.

As she reeled from the news that son David had been raped by Josh Tucker, Gail decided it was proof of the curse of Richard Hillman and to telephone Rosemary and get it sorted.

He was shown next to Rosemary in a car complimenting her on a con well done.

One wrote: “Yaaasssss Lewis the legend is back!!!

“One of my fave ever scenes was the dvd he left for Gail telling he never loved her #Corrie.”

A second added: “Well @itvcorrie certainly pulled out all of the pit stops tonight! What an absolute bloodbath!

“#corrie #Phelan #yesanna #karma Oh and Lewis is back… didn’t see that one coming!”

A fifth said: “Rosemary and Lewis are a perfect match; both articulate con artists.

“Although the latter has managed to screw the same family over twice, so that must fill Rosemary with confidence about what she’s going to do! #corrie #CoronationStreet.”

However some fans mistook Lewis for Richard Hillman and got a bit too excited.

My face when I saw Lewis back in #Corrie pic.twitter.com/7FuAs0zxJR

That scene with Anna and Eileen was one of the best I've ever seen on #Corrie. Plus, bringing Lewis back is BEAUTIFUL.

Mixed emotions as one legend leaves and another returns #Pat #Lewis #Corrie pic.twitter.com/ODoRgaZxwn

When you see "Lewis" is back on… #Corrie pic.twitter.com/E0b4EIcpe4

One wrote: “Richard Hillman, REALLY?! Desperate script writing…. reminds me of Dallas, it was all a dream.”

Another added: “#Corrie remind me again was that Richard Hillman or was that another bloke it’s doing my head in.”

But Entertainment Daily can confirm it is Lewis and not Richard Hillman.

What do you think he has in store for Gail? Leave us a comment on our Facebook page @EntertainmentDailyFix and let us know what you think!