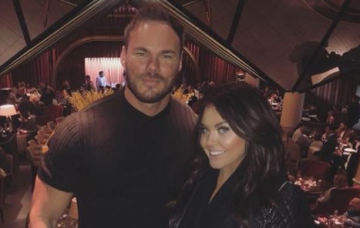 They rekindled their romance in May

Scarlett Moffatt and boyfriend Lee Wilkinson are at the centre of fresh split claims just two months after rekindling their romance.

According to The Mirror, the pair have called time on their romance and unfollowed each other on social media.

An insider told the publication: “They’ve both changed their profile pictures on all social media. It seems pretty final this time.”

However, neither Scarlett nor Lee has confirmed this is true.

Scarlett hasn’t shared photos with Lee since June 14, when she posted a photo of them during a holiday in Amsterdam.

The former Gogglebox star, 28, recently shared a cryptic message to Instagram of a Love Island meme about not needing a man.

Sharing a clip of islander Georgia Steel composing herself after being dumped by Josh Denzel, a quote read: “When you’re a strong independent woman who realises she doesn’t need a man to thrive.”

Just last month, Scarlett said she and Lee were “really good” as she addressed the social media rant in which she referred to a “pathological liar”.

In April, the former I’m A Celebrity star shared a string of emotional social media posts about a “pathological liar” and always choosing the wrong men.

At the time, it was presumed Scarlett was referring to Lee, however, Scarlett insisted she wasn’t.

During an interview with The Sun’s Dan Wootton Interview Podcast, the Saturday Night Takeaway star revealed she was talking about someone else.

When quizzed on the social media rant, she laughed: “That wasn’t actually about him! That was about another ex. I was just ranting. I was in a really angry state, the red mist descended and I went on a rant.”

Speaking about her relationship with Lee, Scarlett added: “We are really good. We were alright the day after. I just went on a little bit of a mad one.”

More recently on social media, Scarlett has seemed to be in good spirits and hasn’t mentioned the rumours she and Lee have split again.

Earlier this week, the telly fave took to Instagram to share a selfie of herself on her way to Wimbledon.

Scarlett looked as glam as ever as she sported a bright red lip and a pair of statement sunglasses.

She captioned the post: “Wimbledon ready… can’t explain how excited I am… feeling posh at centre court.”

Fans gushed over Scarlett’s look, with many saying she looked “amazing” and “radiant”.