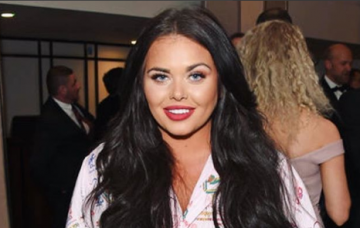 She denied an April social media rant was about Lee

Scarlett Moffatt has denied THAT social media rant about a “pathological liar” was referring to on-again boyfriend Lee Wilkinson.

The former Queen of the Jungle made headlines in April thanks to a string of emotive social media posts on Facebook about a “pathological liar” and always choosing the wrong men.

At the time, it was presumed Scarlett was referring to Lee, whom she was rumoured to have just split from briefly before getting back together.

However, in a new interview with The Sun’s Dan Wootton Interview Podcast, the Saturday Night Takeaway star revealed she’d actually been talking about someone else entirely!

When quizzed on the social media rant, she laughed: “That wasn’t actually about him! That was about another ex. I was just ranting. I was in a really angry state, the red mist descended and I went on a rant.”

Scarlett added of her romance with Lee: “We are really good. We were alright the day after. I just went on a little bit of a mad one.”

She also admitted posting on social media because she genuinely forgets that “people care and are watching what I write.”

The former Gogglebox star insisted she still can’t see herself as a celebrity, as she hates that word.

“My job is just that I happen to be on telly sometimes,” she added.

Proving just how “good” she and Lee are, the star posted a throwback photo of them to Instagram on Thursday, taken on a recent romantic trip to Amsterdam.

Earlier this month, a loved-up Scarlett called Lee the “best boyfriend ever” after he rescued her following car trouble on the motorway.

She told fans Lee drove to collect her and a friend after their car broke down.

She explained: “When your boyfriend is driving all the way to Pontefract to pick you up! #stranded.”

Scarlett then made her feelings towards personal trainer Lee very clear by sharing a throwback pic of them captioned: “Best boyfriend ever!”

And, true to his word, Lee did indeed rescue Scarlett and her pal, and she confirmed in a later Instagram post she’d made it home!

What’s the most romantic thing your other half has ever done for you? Leave us a comment on our Facebook page @EntertainmentDailyFix and let us know!