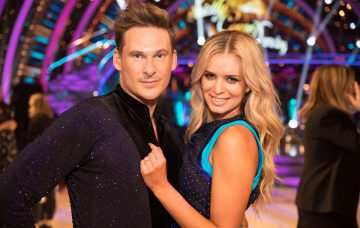 The main competition hasn’t even started, and yet we’re already been hit with rumours that the now infamous Strictly Come Dancing curse has already claimed its first couple of the series.

The pair looked cosy as Lee, 35, took Nadiya, 29, by the hand as they walked to lunch in between rehearsals – despite the fact Nadiya is thought to be dating Slovenian football player Matija Skarabot.

But Lee has evidently clapped back at the rumours that he may be more than friends with former Playboy cover star Nadiya.

Taking to Instagram, the One Love singer posted a picture of him walking hand-in-hand alongside ex-fiancee Samantha Millar in a shopping centre.

Seemingly taking aim at the rumour mill, Lee captioned the post, “If you can’t laugh, you’ll cry,” followed by a series of emojis.

Fans were quick to admire Lee’s jovial attitude towards the rumours, praising him for shrugging off any negative attention.

“People are going crazy about this!” wrote one fan. “Keep them guessing!”

Another added, “Live, laugh and love with whoever you want to.”

Samantha ended her two-year romance with Lee in 2010, with the pair sharing nine-year-old son Rayn.

But Lee, who is also father to 11-year-old Bluebell, is thought to have several irons in the fire as he prepares to show off his smooth moves on the Strictly dancefloor.

It was reported that Lee had been “flirting up a storm” with fellow Strictly hopeful Susannah Constantine at rehearsals.

A show source teased, “It was all harmless flirting. Susannah is married but Lee is single. The pair have good chemistry together, although they make an oddball couple.”

Lee is also thought to have been getting close to Kazakhstan model and actress Diora Romanova, with the pair sharing a series of flirty texts.

The chart-topper was thought to have taken a shine to Diora, who, at 22, is 13 years Lee’s junior, when they met at the My House music festival in Almaty last month.

“They got chatting and hit it off,” said a source. “He quickly asked her out, and they already look like a long-term couple – they couldn’t keep their hands off each other.

“He’s always been very charming and a bit of a ladies’ man, but she is enjoying herself too and they were happy to pose for pictures together.

“It’s still early days but Diora and Lee are getting to know each other and exchanging lots of messages in between his Strictly training.”

But while Lee keeps a number of women on their toes, the former EastEnders star is thought to be nimble-footed himself, as one of the favourites to scoop the all-important Glitterball trophy.

Stricrly Come Dancing starts on September 22nd on BBC One.