This is just wrong.

Max Branning isn’t exactly the most popular person on Albert Square at the moment, and it might not just be because he tried to bring the entire area down in a twisted revenge plot.

Eagle-eyed EastEnders fans have flooded Twitter with messages of disgust after noticing Max has been wearing the same clothes since Christmas Day.

No wonder everyone’s giving him a wide berth.

Fans have noted he’s been clad in the same jacket and jeans since December 25th and have pointed out that he must be smelling less than pleasant by this point, especially as he’s been sleeping in his car.

If the launderette was open, we’re pretty sure those jeans would’ve walked themselves there by now.

Viewers were also surprised that someone so whiffy and with questionable persona hygiene would be allowed so close to daughter Abi’s premature baby girl.

“Wish Max Branning would change his clothes. Poor guys been wearing them for three weeks!” observed one fan.

Another added: “When was the last time Max Branning had a bath? His breath probably absolutely stinks yet a premature baby is handed over to somebody who is wearing filthy dirty clothes and not even wearing a mask or protective clothing. Absolutely ridiculous #EastEnders.”

While a third begged: “Can someone, anyone, provide Max with a change of clothes?! #EastEnders.” 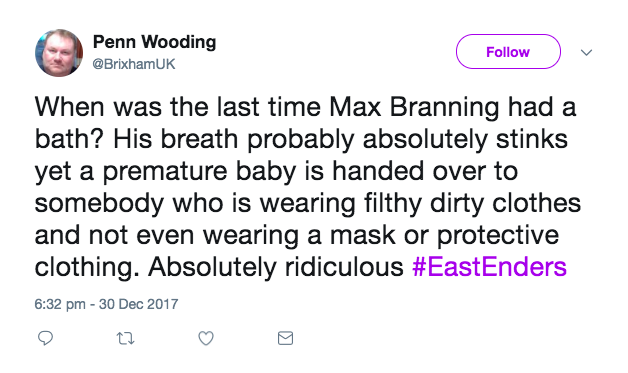 Max has been homeless since his dastardly plan for getting revenge on everyone in Walford who wronged him came spectacularly undone on Christmas Day, when both his daughters fell from the roof of the Vic.

He’d already been kicked out by his brother, Jack, who discovered Max had manipulated Ronnie’s baby son, Matthew, being taken from him.

He was staying with Stacey and Martin Fowler, but that all went pear-shaped after he slept with Stacey who then found out he’d killed Steven Beale and had left Jane to burn to death in the restaurant fire.

Strangely, none of the Square residents have complained about Max hanging around looking much like Ian Beale did when he was homeless.

Read more: Is Fi Browning planning a return to EastEnders?

He even had a one on one conversation with Abi’s ex-boyfriend, Jay Brown, who didn’t wrinkle his nose or gag once.