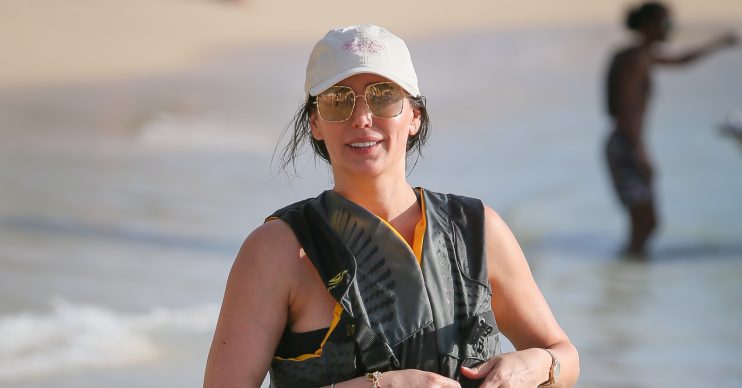 She took to the waves

Music mogul Simon Cowell has been enjoying a family holiday in Barbados in the lead-up to Christmas.

The X Factor boss, 60, has been seen frolicking on the beach and flashing his toned body with wife Lauren Silverman, 42, his five-year-old son Eric and Lauren’s son Adam, 13.

But it was Lauren who stole the show as she took to the water to jet-ski around the island.

Mum-of-two Lauren looked right at home on the beach as she wore a stunning black, one-piece swimsuit with buckle detail at the top.

She pulled on a life jacket for the trip, which saw Simon and Eric take to the waves as well.

Later in the day Lauren swapped her life jacket for a sleek sarong with green-leaf detail, statement shades and a stylish sun hat.

As the sun began to set on the tropical Caribbean island, she walked her dogs with her two sons.

Earlier in their holiday, Simon, 60, sported a black eye as he enjoyed his tropical break.

According to the MailOnline, Simon hurt his eye after knocking his face on his own front door.

The bruising happened when Simon hit his face on his front door and it also cut him above the eye.

A source told the publication: “The bruising happened when Simon hit his face on his front door and it also cut him above the eye.

Read more: Simon Cowell comforted by partner Lauren as he breaks down in tears on X Factor: Celebrity

The family’s holiday comes after the music mogul – and head judge of The X Factor and Britain’s Got Talent – inked a new five-year deal with ITV that guarantees the return of The X Factor next year.

Simon said: “I am thrilled our relationship with ITV is to continue for the foreseeable future.

“ITV has always been home to Britain’s Got Talent, The X Factor – and me – and this long-term commitment shows the mutual respect in our partnership.