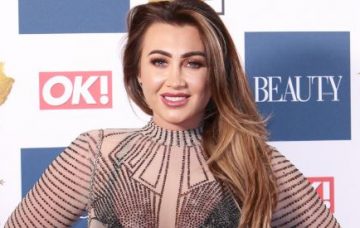 What do YOU think?

Lauren Goodger has set Twitter alight after voicing her views on parents who leave their children with nannies.

The former TOWIE star kick-started the debate after reading a story about a nanny who was caught on hidden camera mistreating a baby she was looking after.

Lauren tweeted: “This lady needs more than a sentence. I feel so uncomfortable watching that I could cry.

“Put me in a room with this woman she needs this treatment done to her I feel [bleeping] raging! This is why parents should NOT go to work and leave with a nanny! I don’t care what people say.”

Her comments attracted the attention of many people, including one who told her: “As a nanny myself, that statement is so degrading. 99.9% of people who work with children do it for the love of the job and the satisfaction of watching these kids grow healthy and happy. Don’t paint a large group of people with one brush.”

Other followers told Lauren they had no choice but to leave their children with a nanny when they needed to work.

One said: “I would love to not go to work and spend every minute with my children, I don’t choose to go to work I work to provide for them, no parent would expect this to happen when you put trust and a lot of money into childcare.”

Another commented: “What a daft thing to say. I’m sure lots of parents would love to stay at home but this is just not financially possible!”

Lauren later returned to social media to defend herself, writing: “No amount of money or career is worth leaving my baby with a stranger! NEVER. i

“It’s heartbreaking to think mums would still do this even after seeing this! Like I say if u no the nanny well or adult your leaving them with n u trust them that’s different story! It’s not always the case (sic).”

But again, Lauren was hit with a wave of criticism from followers.

One told her: “I think your stance on this shows your lack of understanding of normal life. Most people don’t make money from magazine shoots they have to do a 9-5 job to put food on the table.”

Another said: “So you wouldn’t send your child to nursery or school? Are the teachers/carers there not strangers? Don’t let the actions of a minority of people tarnish the hard work many childminders/nannies put in!”

A third wrote: “The only person to blame is the nanny for abusing her trust, NOT the parents for working. Shall we all give up work now then and live on the dole?!”

And a fourth added: “Lauren what planet do you live on? If you don’t work you don’t have money to live, not everyone is lucky enough to have the life you have! Me & my husband both work full time just to make ends meet, does that make me any less of a mother NO!!!”

Lauren responded to all the comments by tweeting: “Actually not even wasting my time explaining .. you no exactly what im saying about leaving your baby with someone you trust yes even a nanny that you no well !.. id never leave my baby with someone I hired ! Here’s your prime example why and I’ll NEVER change my view on this (sic).”

While plenty of followers disagreed with Lauren’s view, others backed her up and agreed.

One said: “100% agree with you, this why I’m a stay at home mum and my husband works, makes me sick seeing this done to innocent children. Too many things like this are happening.”

Another wrote: “I 100% agree. Nobody should have to leave their baby the most precious thing in the world to you with someone you don’t know.”

A third said: “I totally agree you cannot trust anyone with your babies.”

After seeing their support, Lauren again tweeted: “I no makes me think what type of mother are you to not agree with me? Who said you can’t work? Who said they can’t put them in nursery? All I’m saying is make sure it’s with a nanny you no them well enough and would trust your life with that person’ coz my child will be my world (sic).”

Again, though it set off a whole fresh debate about mums, nannies and leaving kids with carers…

This time, Lauren hasn’t said anything else.