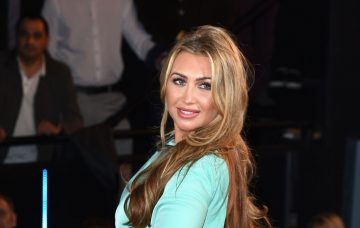 She debated the issue on This Morning on Thursday

Reality star Lauren Goodger has urged the female contestants on Love Island to “take control” and said they are being “psycho”.

The Only Way Is Essex star said the girls were allowing themselves to be treated badly on the ITV2 dating show.

Personal trainer Adam Collard has been accused of “gaslighting” solicitor Rosie Williams, and a leading women’s charity has spoken out about his behaviour.

But Lauren told ITV’s This Morning: “I don’t condone being horrible to girls but it’s a TV show and it’s a game, it’s Love Island! They have known each other how many days?”

She added: “I think the girls are acting a bit psycho. I’m a girls’ girl, please believe me. I would be different and play the game.

“But the reason Adam has jumped ship is that they are acting psycho.”

Asked if she believed Rosie in particular was acting that way, Lauren replied: “Yes, I do! She is so emotionally involved. Enjoy it – you’re a young girl, a solicitor, act a bit more professional, get involved. I can’t believe how she’s acting.

“They are in that game. They are there to find someone they are compatible with. They are not in relationships.”

Viewers were horrified when Adam smirked as Rosie cried when she told him how much he had hurt her by dropping her for government adviser Zara McDermott.

Lauren said: “Women be a bit stronger! Take control, don’t let the boys decide. That’s what I’m trying to get across. They are letting Adam treat them this way.”

Some viewers agreed with Lauren’s thoughts.

Never thought I’d say this but I agree with Lauren Goodger on This Morning. I don’t think Adams done anything wrong, it’s a game. Get a grip 🤷🏻‍♀️😂 why would you wana be with anyone who acts like that anyway?! #ThisMorning #lovelsland

Phil and Holly your overreacting 🙄 I totally agree with Lauren #ThisMorning

However, other viewers disagreed with Lauren’s point of view, with some claiming she was blaming the victim.

#thismorning @thismorning I don’t agree with Lauren at all, none of the girls have ‘acted psycho’ I think Rosie has handled herself very well considering the way Adam has treated her, making her think it’s all her, just because a girl is upset doesn’t mean they are psycho at all

Katie Ghose, chief executive of Women’s Aid, told the show: “Some of the things we have seen with his behaviour are making her question her memory of events that have actually happened and that is something in real life, if it goes repeated and unchecked, can form part of a pattern.

“Gaslighting is a particularly horrible form of emotional abuse and it can involve over a long period of time often the partner literally making their partner question what actually happened so that they will begin to, in the worst cases, question their own sanity and they will feel they are always to blame for everything, even the relationship itself.”

Adam’s family, however, issued a statement via Instagram reminding Love Island viewers that only one-hour of action is aired from a 24-hour period each night.

They also pointed out the show is “edited” into an hour so viewers only get a snippet of what happens.

Their statement said: “Well it’s been an eventful 24 hours 👀. I think everyone needs to remember that Love Island is a reality game show and everyone only sees 1 hour of edited footage per night.”

It concluded: “Adam is doing what he feels is right for him and it is nice to see someone doing what they actually feel is right as oppose playing up to the cameras (sic).”

What do you think about Adam’s behaviour? Leave us a comment on our Facebook page @EntertainmentDailyFix and let us know.