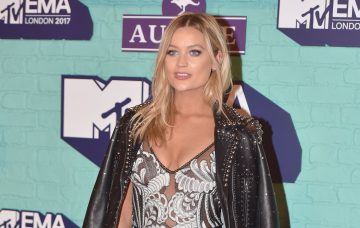 Laura Whitmore has opened up for the first time about her romance with Love Island narrator, Iain Stirling.

The former MTV presenter and Strictly star, 33, revealed how they tried to keep their blossoming romance under wraps for as long as possible, but were almost caught when she accompanied Iain to Majorca, where Love Island is filmed, last year.

She told Fabulous magazine: “We tried to keep it as quiet as possible at the start. I remember going to Majorca last year and not telling anyone, even though I knew most of the crew.”

Joking, Laura added: “If anyone had seen me, they’d be like: ‘What the hell is Laura doing here?’ I thought nobody knew but it turned out afterwards that everyone did!”

The couple first met at the British Academy Children’s Awards in 2016, but waited nine months before going on their first date.

Surprisingly Laura now posts pictures with Iain, 30, on her social media – something she hasn’t done with previous boyfriends.

Her mindset, she explains, has completely changed in that she now prefers to ‘own’ her private life, to give her more freedom from  people trying to find out who she is dating.

She added: “We’d been together for four or five months before we put anything on our social media. I think at that point we were both like, ‘Should we just own it?'”

Earlier today, Laura even teased fans that she and Iain were working together on Love Island, as she posted a snap of her in front of a microphone with the ITV2 show in the background.

“Bring your girlfriend to work day…” Laura captioned the picture.

The loved-up pair certainly seem to be enjoying their time out in Majorca this year, now that their romance is out in the open.

Earlier this week, they enjoyed a romantic boat trip, with Laura trying her hand at sailing – despite her fashion faux pas!

“I thought the hat was fashionable. Turns out it was just impractical,” she joked, tagging her boyfriend in the post.

And while Laura is clearly enjoying her sunshine break, the presenter has her work cut out for her back home – having made the jump from TV to radio.

We think this pair may have just become our new favourite couple.

Which celebrity couple are you crushing on? Leave us a comment on our Facebook page @EntertainmentDailyFix and let us know what you think!