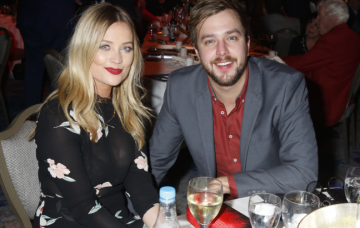 Iain Stirling was able to take a break from his Love Island duties on Saturday to celebrate his first anniversary with Laura Whitmore.

The happy couple marked the occasion in style, going to Wimbledon to watch the action on Centre Court.

Sharing a picture of them together at the tennis championship with his Instagram followers, Iain wrote: “One year with this class act.”

The picture showed them looking happy and relaxed, with the Love Island narrator wearing a a white shirt and black trousers, and Laura a stylish pink pinstripe suit with a crop top.

Iain’s fans commented on the image to wish the couple well, with many complimenting them both on how they looked.

“Gorgeous couple,” wrote more than one, with others saying they were “looking fab”.

“You guys are the cutest,” said another.

The Survival Of The Fittest presenter also told her Instagram fans about their anniversary, adding that it has fallen on a busy day.

Read more: Love Island’s Adam and Zara reunite – but is there trouble?

“Wimbledon. Pride. World Cup.  Anniversary (so much to do so little time!)” she wrote beside a selfie of her and Iain in their seats on Centre Court.

She also updated her Stories with a selfie on them en route to the venue with the caption “Wimbledon bound. Anniversary day!” and another of them sweltering in the car as Britain basked in a heatwave.

Her fans were also keen to wish the pair a happy anniversary with many commenting on her post.

They then went public with their relationship in January by posting snaps together on social media.

Speaking of how their love blossomed, Laura told the Daily Mail: “We were friendly for a while before it developed into something more, but we didn’t tell anyone for ages.”

The former Strictly star added that the romance was a slow-burner as their work commitments around the world meant they couldn’t always spend a lot of time together.

“It’s quite hard when you’re back and forth and you try and see each other as much as you can. It was slowly, it wasn’t a rush. it was a slowly developing thing. We kept it very quiet,” she said.

Meanwhile, Iain has joked that he knows he’s “punching above his weight” with his model girlfriend.

“I don’t mind it, because it just means I’ve done better haven’t I?” he told Chris Ramsey when he teased him about it on his show in March.

“I think I’ve done quite well out of it, but I’m dead happy because she’s lovely and stuff.”

Things have been getting serious between the pair, who have been reported to be moving in together.

Iain was able to enjoy a day off his Love Island duties to spend the day with Laura as a new episode isn’t broadcast on a Saturday. Instead, viewers get to tune into previously unseen footage from earlier in the week in a compilation show.

It seems the narrator has been getting fully immersed in the drama of this year’s series. Tweeting about the recent fall out between Georgia Steel and Laura Anderson, he said he would show the Islanders a clip of Georgia kissing Jack Fowler if he got enough retweets. 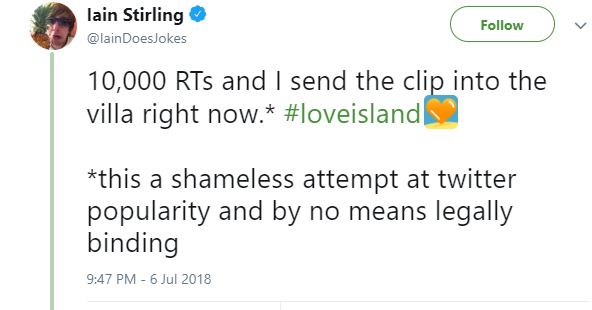 He then clarified to stop people getting their hopes up: “This a shameless attempt at Twitter popularity and by no means legally binding.”

Do you think Iain and Laura make a good couple? Leave us a comment on our Facebook page @EntertainmentDailyFix and let us know what you think!