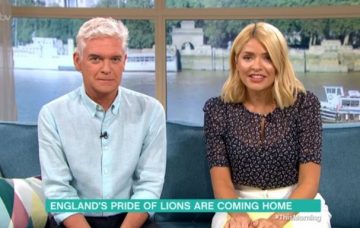 This Morning launches campaign to get Gareth Southgate a knighthood

The pair launched the campaign on Thursday’s episode of This Morning to honour Gareth’s success in getting England to its first World Cup semi-final since 1990.

Although England lost the semi-final to Croatia on Wednesday night, the pair said Gareth should be recognised for his achievement in getting the team this far and uniting the whole country.

Phillip said: “If you want to appoint someone for an honour you send it to the Honours and Appointments Secretariat at the Cabinet Office.”

The letter from This Morning read: “On behalf of the nation, we at ITV’s This Morning would like to nominate Mr Gareth Southgate for a knighthood.

“He brought our country together in celebration and support of England in one of the world’s most prestigious sporting events, leading his nation to victory and shown us how to be humble in defeat.”

Phillip and Holly then signed the letter live on air.

Phillip pointed out Gareth would probably have “loads” of letters sent from various people and organisations nominating him for an honour.

Just before signing the letter, Phillip and Holly had spoken to Simon Harris, who launched his own Change.org campaign to get Gareth Southgate knighted.

The petition, which you can sign here, has nearly reached 5,000 signatures!

Simon said: “He has single-handedly turned our the national team that forever let us down into something that England can be proud of.”

England lost to Croatia in Wednesday night’s semi-final in Moscow, with Croatia winning 2-1 in extra time.

The team and coach Gareth have been hailed as “heroes” by celebrities and fans, who have all said how proud they are to have watched England make it to a semi-final in the World Cup.

Phillip said on This Morning the team had united the nation and everyone would be cheering them on at the next big tournament.

Did you watch the game? How do you feel about the result? Leave us a comment on our Facebook page @EntertainmentDailyFix and let us know what you think!