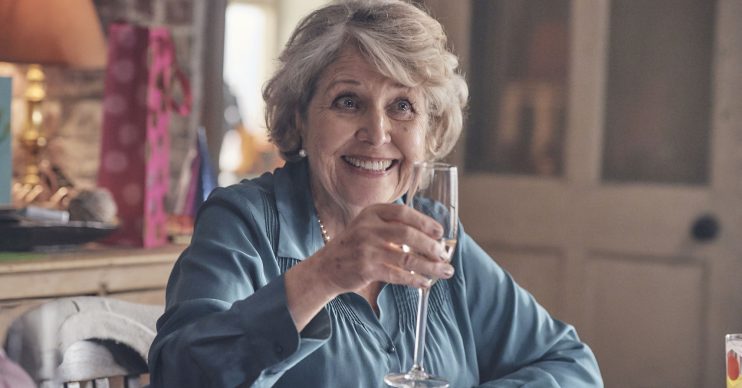 The star-studded show is back for a fifth series

It may be the fifth outing for the much-loved characters of Last Tango in Halifax, but life for the two families is still taking a few unexpected turns.

Caroline, played by Sarah Lancashire, announced in tonight’s episode she is happy and contented, despite never having expected to be raising a child on her own.

Viewers soon saw her flirting with an apparent new love interest, however – Ruth, played by The Witcher’s Lu Corfield – and a dinner date was arranged.

Before we had a chance to see that, Caroline and Gillian (Nicola Walker) celebrated their joint birthday, and it was back to the family dynamics.

But the celebrations were not harmonious for long.

Firstly, Celia (Anne Reid) divulged the news that Alan’s (Derek Jacobi) brother now has dementia. Brother Ted, who is played by Timothy West, was on his way from New Zealand, but viewers will have to wait until next week to find out what his condition is really like.

So happy #LastTangoinHalifax is back, it’s been far too long.

Then one of the children let slip that soft-hearted Alan had secretly agreed to help Gillian out with the cost of dealing with her woodworm problem.

Celia had her heart set on a new kitchen, and was not best pleased that this meant she would now have to wait.

Viewers were quick to express their affection for the series, which first hit screens back in 2012. “So glad it’s back!” One wrote on Twitter. “Oh how I’ve missed #lasttangoinhalifax!” said another.

Many took to Twitter to criticise Celia for her outburst over the woodworm loan, and other jibes at Alan throughout the episode.

“So happy #LastTangoinHalifax is back, it’s been far too long. (I’d forgotten how annoying Celia could be though.)” said one fan on Twitter.

But others defended her.

“Why should they hand money over to the never ending car crash that is Gillian?” one viewer tweeted.

In just a week, we will find out whether Ted’s arrival brings peace or more chaos to the Yorkshire bunch. You can bet there will be plenty more in the way of surprises to come.

So happy #LastTangoinHalifax is back, it’s been far too long. (I’d forgotten how annoying Celia could be though.)

Why should they hand money over to the never ending car crash that is Gillian? #LastTangoInHalifax

What did you think of the show? Let us know your thoughts on this story on our Facebook page @EntertainmentDailyfix.