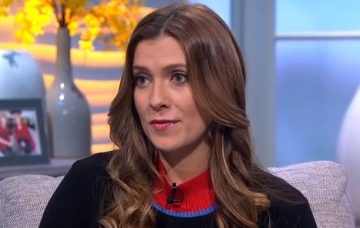 She doesn't want any more "trauma" from childbirth

Kym Marsh has revealed she underwent a procedure to stop her having any more children following two traumatic births.

The Coronation Street star lost her baby son Archie in 2009 when he died moments after a premature birth.

Writing in her new OK! magazine column, the soap star said she’d “made peace” with the fact she won’t be having any more children.

She explained that after Polly’s birth, she told her doctor she didn’t want to expand her family again.

“I didn’t want to go through the trauma again because there would never be any guarantee it would be fine. And not just for me, but for my children and my parents – everyone suffered,” she said.

“I had a procedure to stop all the women’s problems I was having and that means I can no longer have a child.

“I took that decision five years ago and I made peace with it then.

“I’ve got three beautiful children and an angel.”

The former Hear’Say star shares daughter Polly, six, with ex-husband Jamie Lomas. They lost son Archie in 2009, when he died seconds after being born prematurely at just 21 weeks. She also has daughter Emilie, 20, and son David, 22, from a previous relationship.

It was during an appearance on ITV’s Lorraine last week that she first revealed her decision to not have any more kids.

“I made that decision after I had Polly. I don’t know if anybody knows. I almost lost Polly as well several times throughout the pregnancy and it was very traumatic.

“I was on bed rest for months and she was born very early. She was born seven weeks premature. Thankfully she’s okay and really healthy, but it was traumatic.”

Kym continued: “I took the decision I wasn’t going to [have more children] as I’m lucky enough to have the three children I’ve got, and I didn’t want to run that risk because it’s too painful.”

She told Lorraine that she’d always wanted to do something in Archie’s memory, especially after seeing the impact of her Coronation Street stillbirth storyline last year.

We hope the ball is a huge success, Kym.