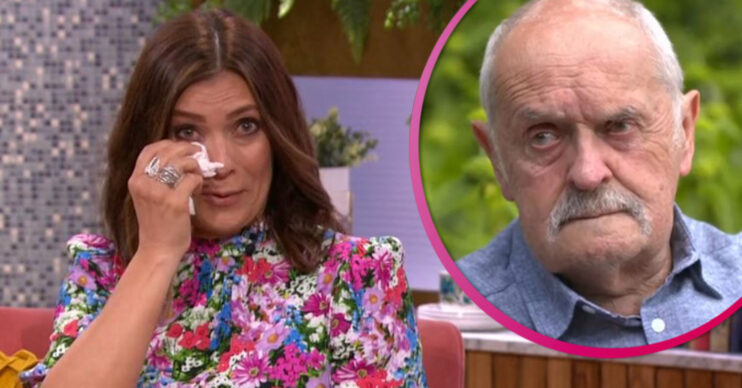 Kym Marsh in tears over her dad’s incurable cancer diagnosis

Kym Marsh says her dad has been diagnosed with cancer in a new interview. She urges other men to visit a doctor if they have any symptoms.

The former Coronation Street star shared the news that her father has received an incurable diagnosis of prostate cancer after delaying visiting the GP due to the pandemic.

The 45-year-old explained how dad Dave, 76, delayed visiting the doctor, not wanting to pressure an already overstretched NHS during lockdown.

Kym, who hosts BBC One’s Morning Live, told The Sun that “speed is crucial – it can make all the difference”.

The actress added: “At this stage doctors are talking about it being incurable, but it is treatable and the hope is that they my be able to extend his life – but by how much nobody really knows and he is in discomfort.”

Due to lockdowns, there have been 50,000 fewer referrals for suspected prostate cancer.

Kym is urging other men to seek help

The actress revealed that the cancer has spread to her dad’s pelvis, spine, ribs and left leg. She says other men should go for a check-up if they have symptoms.

“The good news is that he has responded well to some of the hormone treatments he’s been given — but he’s still in a lot of pain, and that is very difficult to see,” she explained.

Meanwhile, on today’s Morning Live, Kym became tearful as she sent her dad a message on air.

After watching footage of her dad speaking about his diagnosis, she said: “I’m in awe of him because he’s so brave to share that.

Kym says her dad is now using a mobility scooter for going out and about with mum Pauline, who is still very active.

Kym’s dad Dave said that he hopes he will live long enough to walk his daughter down the aisle. The former Hear’Say star announced her engagement to boyfriend Scott Ratcliff last week.

He told The Sun: “My biggest hope is the treatment keeps working and gives me more time with my family. I want to be fit and well enough to walk Kym down the aisle after she recently got engaged. It’s something to look forward to, and making sure I’m there means the world to me.”

Kym’s dad knew he had some health issues, however he delayed visiting the GP.

He began experiencing pain in his lower back and pelvis and began to find driving difficult, but didn’t go to see a doctor due to being too ‘stubborn’.

Sharing what he hopes will come out of sharing his diagnosis, he explained that his biggest hope “is that other men like me will see this and not leave things too long”.