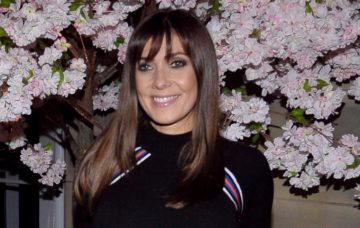 All change for Kym before Christmas!

Kym Marsh has told fans she’s thrilled to have bought a new home, after deciding to sell the one she lived in with her ex-boyfriend.

The Coronation Street actress wrote in her latest OK! Magazine column she had “exciting news” to share after finding her dream property round the corner from her parents.

She had shared her current property with ex-boyfriend Matt Baker but after their split in April, it was time for a change.

Kym, 42, wrote: “Exciting house news! I’ve bought a new place and it looks like I’ll be moving in before Christmas. I sold my house within two days of putting it on the market, so I had to find another place quite quickly.”

The soap star said she’d found a five-bedroom modern house that doesn’t need any work near her parents’ home in Warrington.

“My kids also viewed the new place and all had to approve it, as it’s an important family decision, but they’re very happy,” she added.

Kym said as she’s got a “quiet” period at work coming up, it’s the best time to pack, move and get settled into a new place.

It came as a shock to fans as the couple had previously revealed plans to live together in a newly-bought home.

The actress is now dating Army Major Scott Ratcliff after they were introduced by mutual friend Antony Cotton, who co-stars with Kym in Coronation Street.

Kym and Scott went public with their romance in July and the following month attended their first red carpet event together.

Although he’s accompanied her to a couple of red carpet events, she’s stressed that she’s keen to keep their relationship as private as she can, especially as Scott does not want or seek the limelight.

Have you ever moved home after a relationship ended? Leave us a comment on our Facebook page @EntertainmentDailyFix and let us know.