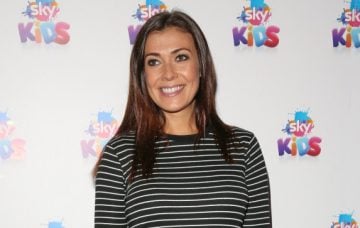 Kym Marsh has revealed her youngest daughter Polly was left in tears after she debuted a new hairstyle.

The Coronation Street actress chose to switch up her locks and go for a darker look with a new fringe but poor little Polly, seven, was NOT a fan!

Writing in her latest OK! Magazine column, Kym – who hasn’t shared a pic of her new look to social media yet – revealed: “I love my new look but when I got home from the hairdressers last week Polly took one look at me and cried!

Kym, 42, added she had to wait until an appropriate moment during her Corrie filming schedule to change her appearance, so it didn’t affect any scenes.

The star, who plays Michelle Connor, said: “I had to wait until I was out of continuity with filming at Corrie, so I thought I might as well have a big change while I could.”

She’s also mum to son David, 23, and daughter Emilie, 21, from a previous relationship.

Meanwhile, there may be more than two months left until Christmas, but Kym’s already got one festive event in the books!

It was announced this week she’ll switch on the Christmas lights at the Crystal Peaks shopping mall in South Yorkshire on November 15.

Elsewhere, Kym made the headlines again in recent days after former Popstars judge Nigel Lythgoe defended calling Kym “fat” during her Hear’Say days on the show.

He was a judge on Popstars in 2001 when he told Kym on camera: “Christmas may be gone but I see the goose is still fat”, before telling her to lose weight.

“She’s made an absolute mint on slimming down, looking fabulous now, acting brilliantly, and she’s made a huge career for herself, bless her,” he said.

Kym has admitted that the comment cut deep at the time, telling the Daily Mail in 2016: “I’d always been quite body confident until that moment but when he said that it really affected me, I couldn’t even look at myself in the mirror.”

Has your child ever hated your hairdo? Leave us a comment on our Facebook page @EntertainmentDailyFix and let us know..