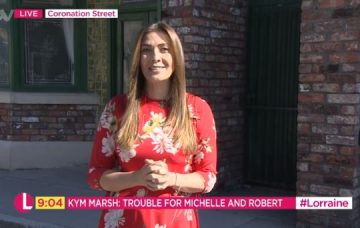 She's said it's "early days" in her new relationship

The Coronation Street star, 42, confirmed this week she’s been dating the Scottish hunk, who serves in the Parachute Regiment, following her split from long-time boyfriend Matt Baker in April.

She was quizzed about Scott during an appearance on ITV’s Lorraine on Wednesday.

Lorraine Kelly brought up Kym’s new romance by saying: “I have to congratulate you, my love, because in real life you have a lovely man. He hasn’t got anything to with acting, he’s in the Parachute Regiment, I believe?”

A thrilled Lorraine told her: “I’m so delighted for you. I don’t know how you manage to see each other with your crazy schedules! I’m so happy for you. You absolutely deserve it, you really do.”

Kym was first linked to Scott last week, with sources saying the couple were taking things slowly and just getting to know each other.

They were pictured together in Manchester ahead of Kym’s 42nd birthday celebrations.

Kym then confirmed the blossoming romance in her latest OK! Magazine column, saying they’d been introduced by Kym’s Corrie co-star Antony Cotton, who is friends with Scott.

She said: “Both Scott and I were recently single – him some time before I was, he’s a good friend of Antony Cotton, who introduced us knowing we’d get on well, which turned out to be true.”

She added that their relationship happened “organically” and it’s “going well, and I’m happy and enjoying life as it rolls along”.

Kym split from ex-boyfriend Matt in April after a three-year romance.

That separation came as a surprise to fans as the couple had recently bought a house together.

Kym was on Lorraine to chat about her appearance in Wednesday night’s NHS Singalong Live, to mark the NHS’ 70th anniversary. She appears on the show alongside her seven-year-old daughter Polly, who had a traumatic birth and was cared for by the NHS.

Will you be watching tonight’s Big NHS Singalong Live?  Leave us a comment on our Facebook page @EntertainmentDailyFix and let us know what you think!