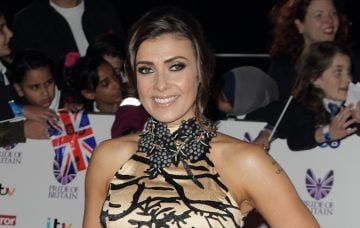 Kym spoke out after Kate Ford targeted with "mean" comment

Last week, Kate – who plays Tracey Barlow – revealed a woman had tweeted a photo of her forehead and suggested she needs Botox.

Well, Kym was NOT amused.

Writing in her weekly OK! column, the soap star called the comment “mean” and said she couldn’t understand why people wanted to drag each other down.

Kym wrote: “I’ve got used to the odd vile comment on Twitter and it doesn’t really affect me any more. Although that’s sad in a way, isn’t it?

“We should all be kinder. I love Kate Ford – she’s a beautiful person inside and out and it really annoys me that someone should hurt her feelings, so back off!”

She told fans: “I won’t Twitter shame, but I’m a 40-year-old woman and another woman has just tweeted a picture of my forehead and said she doesn’t believe in Botox but if she had a forehead like mine, she would. Shame on you! You do women a disservice!” 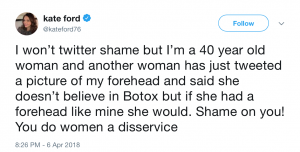 Kym isn’t the only one of Kate’s Coronation Street co-stars to support her.

Catherine Tyldesley, who plays Eva Price, tweeted in response: “You’re kidding me?? Jealously babe. Pure and simple – you’re fit as! What a polluted soul she has. Give me a wrinkle over a [bleep] personality any day.”

She wrote: “When anyone starts at Coronation Street, I tell them never to read them – you’d just want to quit immediately.”

What do you think about trolling and people who leave negative remarks online? Leave us a comment on our Facebook page @EntertainmentDailyFix and let us know.