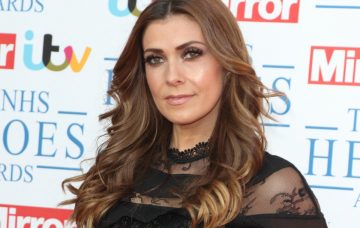 One incident left her fearing she was going to die

Kym Marsh has revealed her first panic attack left her fearing she was going to die.

Recalling the terrifying moment, the Coronation Street star, 42, said she was driving her car when she started to feel light-headed and had pins and needles in her fingers.

Kym, who has filmed a number of emotional and harrowing scenes in the soap, added that she would “start avoiding places” because of her anxiety.

Speaking to The Sun, Kym revealed: “I was getting to the stage where I would get anxiety attacks and I would feel like I couldn’t breathe, I’d get pins and needles in my fingers, I’d get light-headed.”

Kym, who plays Michelle Connor, went on to talk about her very first panic attack.

She said: “It’s a really frightening, really scary thing to experience, I thought I was going to die –  I was driving my car as well.”

Kym revealed her anxiety got so bad she had to seek medical help.

Thankfully, the actress was able to overcome the panic attacks with counselling and coping mechanisms.

Kym said whenever she starts to detect triggers, she just thinks of anxiety as “an old friend”.

This isn’t the first time Kym has opened up about her anxiety.

The star told OK! magazine last month that she thinks it’s “great” that people in the public eye are talking about their experiences of “dealing with mental health issues”.

She said: “I used to suffer from panic attacks but I don’t any more as I manage my symptoms now.

“It’s taken a long time to get to this point – I still get the occasional feeling of anxiety, which is a totally normal feeling to experience.”

Kym has previously said she puts her all into filming dramatic scenes.

Earlier this year, Michelle was caught up in a horrific ordeal with serial killer Pat Phelan, played by Connor McIntyre, and Kym revealed she was left “bruised” after filming the scenes.

She told Digital Spy: “Filming in the Bistro, I was being thrown around by Connor and he’s a strong man.

“Then I had to throw myself on the floor. I was bruised, but you do it and your body doesn’t realise that it’s not really happening.”

What has been your favourite Michelle storyline? Leave us a comment on our Facebook page @EntertainmentDailyFix and let us know what you think!