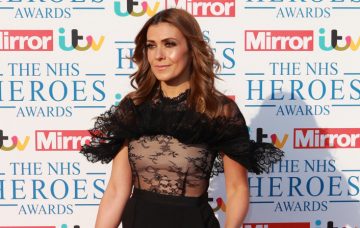 Kym Marsh has said it’s “bizarre” that any parent would want their child to appear on Love Island.

The Coronation Street actress wrote in her OK! magazine column she’d never give eldest daughter Emilie, 20, her blessing to sign up for the ITV2 dating show.

Her comments came after EastEnders star Danny Dyer’s daughter Dani entered the villa and was quoted as saying Danny was okay if she chose to have sex on TV.

“There’s no way I would give my consent for Emilie to do that. Not in a million years. I find it all really odd.”

The soap star continued: “It’s bizarre that any parent would tell their children it’s okay to have sex with random people on TV. And why would you any want to? It would be so embarrassing.”

Of course, having sex on Love Island isn’t actually essential to appearing.

And barmaid Dani has said herself she has no plans to get frisky under the sheets on TV – even if she has her dad’s blessing to do what she wants.

She told The Sun before entering the villa: “He said, ‘Whatever you want to do, go do it.’ And I’m like, ‘Ah thanks, dad.’ I would never have sex on TV. I know everyone says they wouldn’t but I don’t think I would.”

Dani continued: “But he said to me, ‘Listen, if that’s something you did’, and I stopped him there and said, ‘No I wouldn’t.’

Dani is currently coupled up with Jack Fincham but it hasn’t been smooth sailing so far after his cheating confession left her in tears.

The aspiring actress was devastated on Tuesday night when a challenge revealed Jack had cheated on his two previous girlfriends.

She tearfully told the girls she was fed up with choosing the wrong guys.

“Jack is a really sore subject that makes me want to cry,” she said. “It just proves to me I always step forward for the same boys. He has cheated on all his girlfriends. He said, ‘Well, I’ve only had two.’ That doesn’t matter!”

Dani added in the Beach Hut: “I was so disappointed when I heard that fact about Jack. It was only two? I don’t care if it was one! You don’t cheat!”

But with a recoupling looming at the end of the week, could she find herself a new man?!