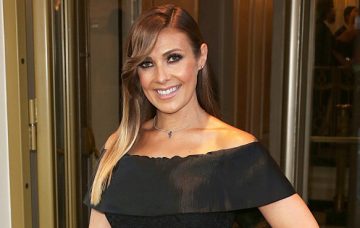 She marked her 42nd birthday on June 13

Kym Marsh has revealed how daughter Polly left her in tears by giving a speech at her birthday dinner.

The Coronation Street actress said she was overwhelmed when little Polly announced she wanted to give a speech after dinner at the local pub.

Writing in her latest OK! magazine column, the soap star recalled: “I was crying because it was so lovely to hear my seven-year-old say unprompted how wonderful I am and that I’m the best mum in the world. That was the best gift.”

The actress, who plays Michelle Connor in Corrie, shared a video of Polly’s speech to Twitter.

This is literally the best gift I could have ever received!!!! Her little speech last night at my birthday dinner 💖 😭💖😭 pic.twitter.com/kuHMPs7vK4

After the dinner, Kym – who split from boyfriend Matt Baker in April – tweeted: “Fantastic night last night for my birthday celebrations!! I have THE best friends and family in the world! I feel so lucky to have people like that around me! You know who you are!”

Kym, who shares Polly with ex-husband Jamie Lomas, was joined at the 42nd birthday dinner by friends and family including eldest children David, 23, and Emilie, 21.

Fantastic night last night for my birthday celebrations!! I have THE best friends and family in the world! I feel so lucky to have people like that around me! You know who you are! #lifeisgood #blessed 💖💙

She said the three children bought her a beautiful silver bracelet that had been inscribed with the initials of all Kym’s children, including Archie, who tragically died moments after his birth in 2009.

“They’d also engraved the initials of Archie, my late son, who’s obviously still a huge part of our family. I was really touched,” said Kym.

She told Lorraine earlier this year that she’d always wanted to do something in Archie’s memory, especially after seeing the impact of her Coronation Street stillbirth storyline last year.

How do your children mark your birthday? Leave us a comment on our Facebook page @EntertainmentDailyFix and let us know.