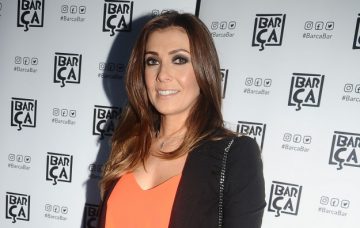 She thinks the chat should have happened privately

Kym Marsh has suggested it was “silly” to think Coleen Nolan and Kim Woodburn could patch up their differences live on Loose Women.

She used her latest OK! Magazine column to discuss the fall-out from Coleen and Kim being reunited by producers on TV two weeks ago in a bid to bury the hatchet following a previous clash on Celebrity Big Brother.

But it didn’t go to plan with Kim, 76, storming off set upset and Coleen, 53, being accused of ‘bully’ tactics, an allegation she has vehemently denied.

In her new OK! Magazine column, out now, Kym remarked: “I do think it’s unfair that people are pin-pointing Coleen specifically. Kim had been invited on the show to see if they could end their feud, which started when they were on Celebrity Big Brother together last year.

“I love Loose Women but I think they should’ve just had their chat privately. It was silly – they weren’t going to kiss and make up.

“Mind you, Kim knew what she was getting into. If I were her, I wouldn’t have agreed in the first place to go on a live TV show with the person I’d had an argument with, her sister and her daily work colleagues!

“She clearly felt very upset but she set herself up for a fall.”

Kym has claimed she was invited on Loose Women as Coleen wanted to resolve their differences, and had been told Coleen would speak first. But when that didn’t happen, Kim says she felt blindsided.

Coleen’s rep, however, has said Coleen did not set the meeting up and it was producers who decided Kim should come on the show.

Kim said she was upset by the whole experience, while Coleen broke down on This Morning last week as she recalled the trolling she’d been subjected to in the aftermath of the TV clash.

Coleen has since postponed her planned solo tour, which was due to start in January, and taken a break from her Loose Women panel commitments.

A statement released by her rep last week said: “Following the constant online bullying, trolling and misrepresentation of her words and reactions, it is with sad regret that Coleen is taking an immediate hiatus form all her current commitments including Loose Women and postponing her Never Too Late solo concert tour.

Did you watch the Loose Women clash? What did you think? Leave us a comment on our Facebook page @EntertainmentDailyFix and let us know what you think!