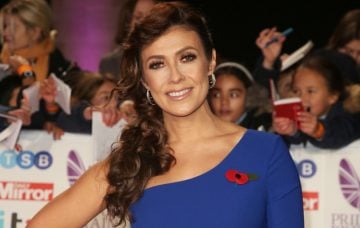 The couple walked the red carpet at Pride of Britain together

The Coronation Street actress looked lovely in a one-sleeved blue gown while Scottish beau Scott donned a kilt for the glitzy ceremony at Grosnevor House Hotel in London.

Their appearance together came after Kym, 42, admitted to being in “complete awe” of Scott and his colleagues after visiting them at work.

Scott is an Army Major with the Parachute Regiment and Kym said in her latest OK! Magazine column that he’s about to go away for work so she’s been making the most of having him while she does.

She said: “Scott did a practice parachute jump this week and I was fortunate to be able to watch. If soldiers in the parachute regiment haven’t jumped for a while, they have to do practice jumps.

“My heart was in my mouth – no way would I jump out of plane – but it was unbelievable.

“I was in complete awe of them all.”

Kym’s own grandfather was a paratrooper in World War II and she said watching Scott training had given her an idea of what her granddad had done.

Earlier this year, the soap star had a tattoo in honour of her grandfather inked on her upper back, showing the symbol his parachute regiment had used.

Meanwhile, Kym and Scott’s romance has been going from strength to strength ever since they were introduced by mutual friend Antony Cotton, who stars with Kym in Coronation Street.

Although Scott prefers to remain out of the limelight, he has occasionally accompanied Kym to red carpet events.

The Pride of Britain Awards, which air Tuesday, November 6 at 8pm on ITV, honours members of the public who have done something remarkable or awe-inspiring.

Kym served as one of the celebrity judges for this year’s awards.

She told Mirror Online: “It feels like a huge responsibility because all of these people are deserving winners.

“If it was left to me I’d give the award to all of them and everyone could be a winner, so of course it is going to be a difficult job but it’s so wonderful to read all the stories that I’ve been lucky enough to read and I’m very proud to be involved in some way.”

Do you enjoy watching Pride of Britain? Leave us a comment on our Facebook page @EntertainmentDailyFix and let us know what you think!