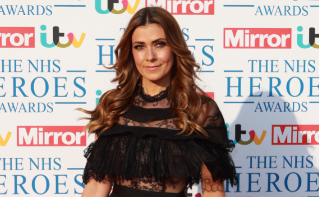 Kym Marsh has claimed Shayne Ward would make a great addition to the jungle if he goes on this year’s I’m A Celebrity.

The Coronation Street actor has been tipped to appear on the reality show following his recent exit from the soap as Aidan Connor.

At the moment his involvement is just speculation, as ITV never comment on who will appear until just before the show airs in the autumn.

But Kym said it would be great if Shayne does head down under.

Writing in her OK! magazine column, she said of her former co-star: “He’d definitely be entertaining if he does head to the jungle.”

She added of the former X Factor winner: “Shayne would be fun and a good sport and he’d probably sing the entire time, as that’s what he used to do all the time at work!”

Shayne, 33, left Corrie last month in emotional scenes after his character took his own life.

Following his success on the soap and The X Factor, a source told the Daily Star that I’m a Celeb producers believe he could be a big hit with viewers, and are keen to sign him up for this year’s series.

The insider said: “Shayne has built up a huge and loyal fan base at Corrie and his exit storyline has been talked about up and down the country.

“But behind the scenes he’s also considered one of the nicest men in soap with a quirky sense of humour that would work well in the jungle camp.

“We think he’s an obvious choice for the new series as he ticks a lot of boxes.”

Shayne said he took the decision to leave Corrie after three years so he could act in more serious dramas, and to spend more time with his fiancée, Sophie Austin, and their daughter, Willow, one.

The couple are also planning their wedding – so could it leave time for Shayne to appear on I’m A Celeb?

Would you like to see Shayne Ward on I’m A Celeb? Leave us a comment on our Facebook page @EntertainmentDailyFix and let us know what you think!