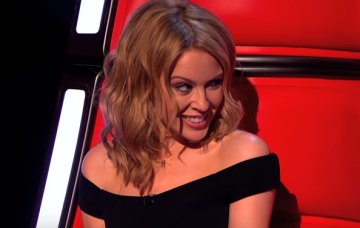 Back where she belongs?

After four years away, a new report says everyone’s favourite hotpant-wearer is returning to UK talent show, The Voice.

Kylie Minogue is said to be returning for the new series of the ITV talent show.

The Sun claims the singer has been signed up to appear as a mentor on the series, where she will help coaches, will.i.am, Sir Tom Jones, and Olly Murs.

The insider says: “Kylie will spend a day working with one of the coaches to mentor their contestants during the knockout stage of the competition.

“Telly bosses are in talks with a number of other big names who they think will be able to provide useful feedback for the singers, too.”

And ED!’s sources say the report is true, adding that as Kylie won’t be a coach, she won’t be sitting in one of the infamous red chairs.

We’re told: “Only the coaches sit in the big red chairs.”

The Spinning Around singer was last seen on The Voice back in 2014, when she was a coach on the third series of the show, alongside will.i.am, Tom and Kaiser Chiefs singer, Ricky Wilson.

Read more: Emma Willis is supporting her husband as he turns to acting

Blind auditions are currently airing on ITV, followed by the Battles stage. Kylie’s cameo will reportedly air next month, during the Knockout stages.

It will mean a busy month for Kylie, 49, as she prepares to release her 14th studio album, Golden, in April.

This week she released the music video for her latest single, Dancing, inspired by her love of country music.

In the video, we see the singer doing line dancing, which she has admitted was tough to learn.

She told Rolling Stone: “I always thought I could learn routines quickly but this was different.

“However, by the time I had to dance with the Grim Reaper at the end I had mastered it. And if that’s not a funny allegory for life I don’t know what is!”

Meanwhile, Kylie has spoken about channelling her heartbreak from her split with ex-fiancé, Joshua Sasse into her new album.

She told The Sun recently: “Making this album was a kind of saviour. The end of 2016 was not a good time for me. So when I started working on the album in 2017 it was, in many ways, a great escape.”

Kylie added that the break-up left her feeling “fragile” but getting back in the studio helped her regain her “sense of self”.