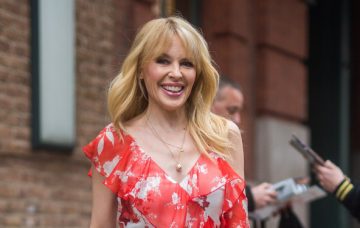 Fans are thrilled to see Kylie looking so happy!

Kylie Minogue has gone public with rumoured new boyfriend Paul Solomons in a picture posted to the singer’s Instagram.

The 50-year-old was in New York with GQ magazine’s creative director, 43, who she has reportedly been dating since February.

On Monday the pair embraced in front of the New York City skyline in an image shared with the Spinning Around star’s 1.7 million followers.

Fans rushed to send Kylie their best wishes, saying they loved seeing her look so happy.

One wrote: “You deserve every happiness x delighted for you.”

Another said: “What a lovely picture she deserves happiness so much she is incredible hope it lasts for her she is amazing we love you Kylie.”

She has since suggested perhaps marriage isn’t for her, telling Red magazine that getting married was never something she grew up dreaming about.

“I never thought I would get married,” she said.

“Just going through ‘being engaged’ seems like an experiment, because I’d never as a girl or in all my life had a vision of getting married.

“It’s not something I needed or wanted. My parents never brought me up with the idea of ‘the big marriage’. I never had it as a goal.”

She added: “I don’t think marriage is for me.”

In an interview with The Sun, she was asked if celebrating the milestone in May made her feel any different and said: “I do, do. It’s been looming. Yes, I’m more content. Some things have started to make sense. I mean, you accept it or you don’t. And I think the best way to accept it is with open arms.

“I say yes or no much quicker than I used to, which is probably good for everyone else as well.”

Kylie is one of the most successful artists of her generation and has so far celebrated 34 UK top 10 singles and sold more than 80 million songs around the world.

She was diagnosed with breast cancer in 2005 and underwent surgery and chemotherapy to beat the disease.

Are you happy for Kylie? Leave us a comment on our Facebook page @EntertainmentDailyFix and let us know what you think!