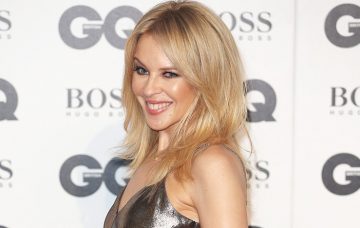 They attended the GQ Men of the Year Awards together

Kylie Minogue said she has found her Mr Right as she attended the GQ Men of the Year Awards in London.

The Aussie singer, 50, has been romantically linked to GQ magazine’s creative director Paul Solomons, 43, and it seems like things are going from strength to strength!

Speaking on the red carpet, the singer teased: “I’ve found my man. Of the year. And some.”

It marked the first time Kylie and Paul have attend a high-profile event together.

They’ve reportedly been dating since February.

Kylie went public with their romance in July, sharing a beautiful picture to Instagram showing them embracing in front of the New York City skyline.

Fans rushed to send Kylie their best wishes, saying they loved seeing her look so happy.

She has since suggested perhaps marriage isn’t for her, telling Red magazine that getting married was never something she grew up dreaming about.

“I never thought I would get married,” she said.

Just going through ‘being engaged’ seems like an experiment, because I’d never as a girl or in all my life had a vision of getting married.

“It’s not something I needed or wanted. My parents never brought me up with the idea of ‘the big marriage’. I never had it as a goal.”

She added: “I don’t think marriage is for me.”

Kylie and Paul were joined at Wednesday night’s glitzy GQ Men of the Year Awards by a string of huge names including singer John Legend, Hollywood actors Chris Hemsworth and Sacha Baron Cohen.

Prince Charles was also in attendance as he was honoured with the Editor’s Lifetime Achievement Award for Service to Philanthropy.

Are you happy for Kylie? Leave us a comment on our Facebook page @EntertainmentDailyFix and let us know your thoughts.