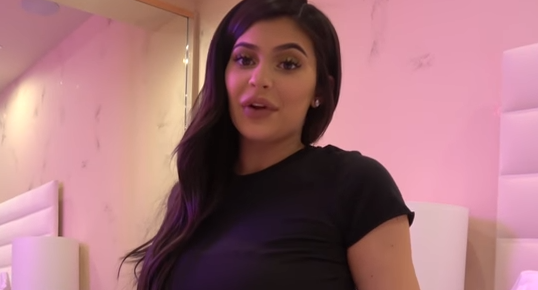 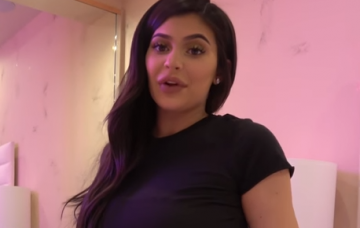 It's a very unusual name!

She posted a photograph of the tiny tot’s hand wrapped around her thumb on Instagram and captioned the image “Stormi” alongside a baby angel emoji.

The Keeping Up With The Kardashians star had been keeping her pregnancy a secret from fans but on Sunday announced that she and boyfriend Travis Scott welcomed a daughter on February 1.

@Capri530 wrote: “So in the Kardashian’s family there’s a Reign and a Stormi, so Khloe better name her kid Cloudie or Lightning.”

Others compared the name to grime star Stormzy.

@bwsariana tweeted: “Honestly tho I’ll never be able to call the baby Stormi, I’ll only think of my man Stormzy.”

@Kskellinator wrote: “I hope that instead of calling Kylie’s baby Stormi, Kanye will call her Stormzy.”

why are the Kardashian babies sounding like a weather forecast: it’s Stormi in North Chicago with a little bit of Reign

I hate my name but at least it's not Stormi

My take on the Kardashian’s names for their children.

One day.. MASON had a DREAM that he and PENELOPE would travel to NORTH CHICAGO to visit a SAINT, but they couldn't make it because it was too STORMI. Turns out it was only a bit of REIGN.

But some fans labelled the choice “cute”.

@CaitlinPresto02 posted: “@KylieJenner has named her cute baby Stormi it’s such a cute name. Good luck to Kylie and Sormi in the near future.”

@Toriimichiee_ tweeted: Stormi has to be one of the cutest names I’ve ever heard.”

stormi is actually super cute. i'm here for it

am i the only person who likes the name Stormi?? its not boring & common its so cute to me😭

I can’t be the only one who thinks that Stormi is an insanely cute name haha.

Jenner’s famous family have celebrated the latest arrival to their clan, who arrived just days after Kim Kardashian West’s own daughter Chicago.

Caitlyn Jenner wrote she “can’t wait to watch her grow” and marked the new arrival by posting a snap on Instagram of daughter Kylie, 20, when she was a baby.

My daughter just had a daughter. It’s amazing to be by your side through this journey. She’s SO beautiful already. Can’t wait to watch her grow. Throwback to my baby, as a baby @kyliejenner

“My daughter just had a daughter. It’s amazing to be by your side through this journey. She’s so beautiful already,” she wrote on Instagram.

“Can’t wait to watch her grow. Throwback to my baby, as a baby.”

Meanwhile, Kim Kardashian West has said her sister was “made to be a mom”.

She wrote: “Congratulations My Sweet Kylie! What a magical ride it’s been! I’ll miss you bumping along with me.

“Never in a million years did I think we would do this together but it’s been that much more special because of it. God is so great!! He had His plan all along! I love you little mama, love big mama.”

Their mother Kris Jenner said she was “excited and thrilled” to welcome another baby to the family.

What do you think of the name Stormi? Leave us a comment on our Facebook page @EntertainmentDailyFix and let us know what you think!