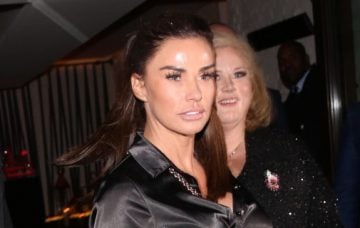 Katie has described new boyfriend Kris as a "gentleman"

Katie Price and Kris Boyson have taken a big step in their relationship: posting their first photo together to Instagram!

In the modern world of social media, sharing pictures of one another online is a pretty clear sign things are going well and you’re getting serious.

The pair shared identical photos to their Instagram accounts on Thursday night.

In the snap, weight loss specialist Kris, 29, is seen chatting on his mobile phone while Katie, 40, clings onto his arm and gazes at him admiringly.

Over on Kris’ page, meanwhile, he captioned the pic: “About time!”

The couple posed for their first glossy photoshoot together this week, gracing the cover of OK! magazine.

Gushing about Kris, Katie said: “I’ve never had anyone who’s like him – he’s a man’s man. He’s got his own job, he’s not false or fame hungry. He goes to work and doesn’t want to hang around me at work.

Katie also defended her new boyfriend against recent recent negative stories, saying: “He’s been slated in the press and he’s just not that person.

She also confirmed her marriage to third husband Kieran Hayler, 31, had ended amid claims he cheated on her again, this time with a 19-year-old shop assistant.

Katie previously accused Kieran of bedding her best friend and the kids’ nanny.

Meanwhile, Katie has also enlisted Kris’ help to whip her into shape after claiming she’s gained one stone since meeting him.

She shared an Instagram live video on Thursday showing herself at the gym with Kris and two friends.

She shares kids Jett, four, and Bunny, three, with Kieran, and has son Junior, 13, and daughter Princess, ten, with her first husband, Peter Andre.

Do you post photos with your other half on social media or prefer to keep private? Leave us a comment on our Facebook page @EntertainmentDailyFix and let us know what you think!