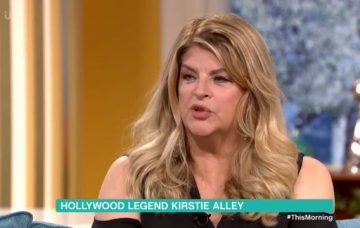 Former Emmerdale star Roxanne, 35, accused Ryan, 34, of punching her during what appeared to be a play fight.

She then quit the show and issued a public apology Ryan, admitting she had got it “massively” wrong.

Speaking on Wednesday’s This Morning, Hollywood icon Kirstie, 67, said she wasn’t aware of Roxanne’s allegation until 48 hours after it happened.

The actress, who finished runner-up behind winner Ryan, recalled how she advised Ryan to talk to producers asap after realising how “career destroying” such an allegation could be.

“The thing with Roxanne was 48 hours long before any of us knew what was going on,” she said.

“They didn’t show us the footage, I had no idea what was going on out there.

“But when I found out what her actual accusation was, I realised that that was a career breaker – a career destroyer – so it became serious business.

“I felt like it was out of my realm to handle and my only advice to Ryan was, ‘get to the producers too’ because at that time I heard that she had gone to her producers, and gone to her manager, and taken it further.

“So I said to Ryan ‘run, you’ve got to go in there and handle this now’. Nick was a big help to Ryan. I think he was really the person who said this is far beyond the scope of just having a chat.”

Kirstie said she didn’t even know she’d been in the kitchen when the alleged incident happened until she watched the footage back.

“What I didn’t realise until yesterday was I was in the room! But we were all jacking around like that… and that looks like he didn’t even make contact…. I don’t know how that turned into what it turned into.”

Roxanne issued an apology to Ryan last week, saying she’d watched the footage back after quitting the show and now knew she’d overreacted.

She told Emma Willis during an interview after her CBB exit: “For Ryan, his family, friends, colleagues and everyone I’ve affected by such an enormous reaction that could have been devastating for him, all I can say is I’m devastated and I’m sorry.

Ryan said in his winner’s interview with Emma on Monday night that he wanted to move on and not dwell on the negatives, but he would accept Roxanne’s apology if she needed that to make her feel better.

He said: “If she wants forgiveness and it makes her feel better, then I would rather give her that because I think she’s been punished enough by the public and the people around her.”

Did you enjoy Kirstie in CBB? Are you happy Ryan won? Leave us a comment on our Facebook page @EntertainmentDailyFix and let us know what you think!