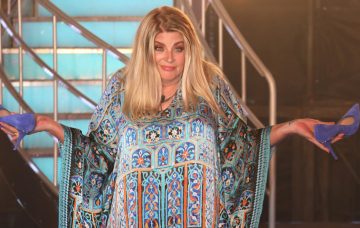 Kirstie Alley appears to have walked away from the Celebrity Big Brother house with something interesting – a crush on Scott Thomas!

The film star responded to a tweet by fellow housemate Ryan Thomas, claiming that she “forgot to [sleep with]” his brother.

Ryan initially tweeted at the actress, saying “life’s no fun without you in it, miss you @kirstiealley 😘.”

The Look Who’s Talking star was quick to respond – claiming she had a thing for Love Island star Scott.

“Hell man, with Brothers like yours you should never be without fun…” she said, before joking “damn, I forgot to [bleep] Scot!![sic] Oh well I’ll be back soon..:).” 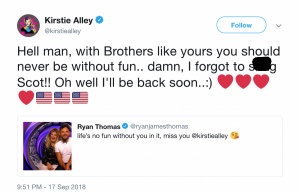 Fans were quick to comment on the hilarious exchange, claiming Ryan and Kirstie were their favourite housemates.

“There’s such an amazing bond between you both ❤ it’s so lovely to see xx,” one fan commented.

“My two favourite housemates this year loved your friendship with Kirsty I miss watching you two,” another fan said.

Another fan commented “I’m so glad the 2 of you were on together made for good TV and the friendship you formed is wonderful. Congrats to the both of you and good luck for future projects. ❤😍👍🤟.”

Scott seemed to approve of Kirstie’s tweet, retweeting it with a string of laughing emojis and a plea for Kirstie to “hurry back soon.”

Kirstie ended up coming second on the reality show, while Ryan walked away with the top prize.

What do you think of Kirstie’s crush on Ryan? Leave us a comment on our Facebook page @EntertainmentDailyFix and let us know what you think!