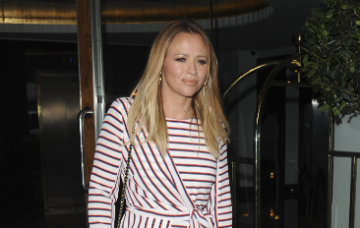 Kimberley Walsh has revealed her mortification after her son was “so naughty” when she took him for a play date at Giovanna Fletcher’s house.

The former Girls Aloud singer joked that she hasn’t been invited back since she visited the wife of McFly’s Tom Fletcher with Bobby, three, and Cole, 19 months.

“I didn’t know her that well, but we have two boys each and they are similar ages, so she was like: ‘Come over! It’ll be great!’,” Kimberley told The Sun’s Fabulous magazine.

“Previous to this Bobby had been an angel child, but he was so naughty, challenging everything I said, and I just didn’t know how to parent in that situation.”

The singer said Giovanna, 33, who has written bestselling books on parenting, was very understanding.

She has two children Buzz, four, and Buddy, two, and is currently expecting a third in September.

She said their sons Bear and Cole, who were born three months part, are “very cute together”.

Despite having her hands full with two children, Kimberley admitted she hasn’t ruled out baby number three with husband Justin Scott, 35.

She said: “I think I’ve got one more in me. I’m one of four so I think that’s why I’m like: ‘We can just keep going!’ I didn’t find pregnancy difficult, and I think if you’ve had a good experience then that makes the decision a bit easier.”

However, she added she would have to convince her husband and time it for when things are less “full-on” than they currently are.

For as well as being a mum-of-two, Kimberley has recently been busy launching her own children’s clothing line.

She recently told The Mirror she would like to do more acting, as it was her first passion before she found fame with Girls Aloud.

“Everybody thinks of me as a singer but actually I’ve been acting since I was five. But I don’t think I could be a Bond girl – those days are over. But I would like to think, as a woman, I could stay on TV for the next 30 years.”

She added that it is hard to juggle work with motherhood but she thinks it is important.

“It’s good for the kids to see me working – it’s a good role model. My mum always worked really hard. It ­definitely had an impact on me,” she said.

Have you ever been on a disastrous play date? Leave us a comment on our Facebook page @EntertainmentDailyFix and let us know what you think!