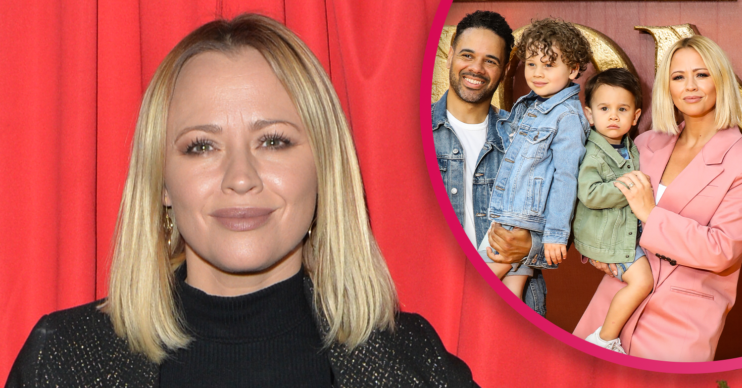 Sons Bobby and Cole are 'thrilled'

Kimberley Walsh has revealed the gender of her unborn baby and it appears she’ll soon be “very much outnumbered”.

Speaking to Entertainment Daily last month, pregnant Kimberley predicted that she would soon be welcoming her third son.

What did Kimberley Walsh say about her new baby?

Kimberley told us: “I’m pretty much assuming I’m going to have another boy so I could be very much outnumbered.

“The boys will be thrilled if it is another little boy and at least I’ll have everything I need.

“They’ll be able to just take them and play with guns and whatever else they usually do. I’ll go off to the spa, see you boys!” she said.

They’ll be able to just take them and play with guns and whatever else they usually do. I’ll go off to the spa, see you boys!

She already revealed that the new baby has given her sons something to “focus” on during the last few months.

However, she did admit that the concept of time has been tricky for them to understand.

“It’s something to look forward to,” she said.

When is Kimberley’s baby due?

Kimberley is now 30 weeks pregnant, which would mean her third baby is due in June.

And, speaking to OK! this week, Kimberley revealed that the baby is indeed a boy.

“With the other boys, we wanted it to be a surprise and something to look forward to, and to keep you guessing. But I think there’s been enough surprises this year,” she said.

How did the boys react to the baby news?

Kimberley also revealed the boys were asking about the baby’s gender “every day”.

Kimberley and Justin told Bobby and Cole with the help of a confetti cannon.

And, she said, their reaction could not have been better.

“It was amazing. Both of their faces when they registered it’s a boy and it sinks in – they were so elated and jumping around and making snow angels in the blue confetti. They were jumping up and down screaming,” she said.

Kimberley added that they’ve both been “Mummy’s boys” for the past few months and she’s unsure if that’s due to lockdown or because they know another baby is on the way.

Kimberley explained: “I think it’s part of the reason I left a bigger gap, because I knew Cole wouldn’t have been able to cope with it when he was too little. But they’re so excited to have a little brother.”

Head to our Facebook page @EntertainmentDailyFix and send Kimberley your congratulations.