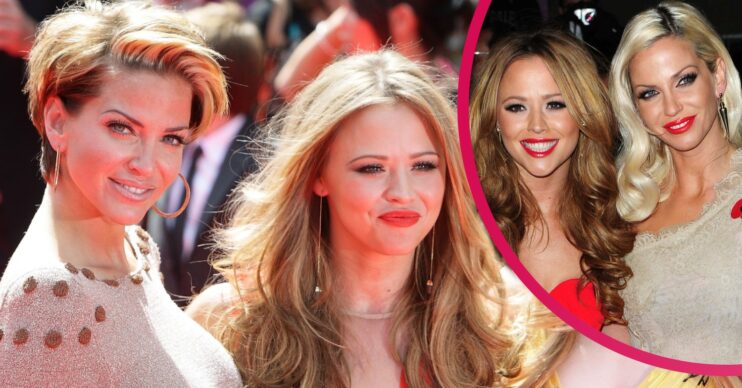 Sarah passed away in September at the age of 39

Kimberley Walsh has revealed that grieving for her fellow Girls Aloud bandmate, Sarah Harding, is a “daily challenge”.

Sarah died in September following a lengthy battle with breast cancer. She was 39-years-old.

What did Kimberley Walsh say about Sarah Harding?

In an interview with Psychologies magazine, the 40-year-old Girls Aloud star admitted she’s still dealing with grief every day.

“I can’t lie, [Sarah’s death] absolutely knocked us all for six and the grieving is a daily challenge,” she said.

“I deal with it [grief] day-to-day and, for me, that’s about checking in with everyone, especially Sarah’s mum, and making sure that they’re OK too. It’s going to take time, and it’s very, very tough,” she continued.

The singer then went on to say that her sons, Bobby, seven, and Cole, five, understand that Sarah is “with the angels”. She also told the magazine that it was “heartbreaking” watching Sarah hold her baby son, Nate, just months before her death.

What else did Kimberley Walsh say?

During the summer, Kimberley, along with bandmates Cheryl, Nadine Coyle, Nicola Roberts, and Sarah, all spent a weekend in the Cotswolds.

Kimberley told the publication that she was grateful for the time they had together. However, she said that it didn’t make it “any easier”.

During their time in Soho Farmhouse, Kimberley revealed that the Girls Aloud bandmates had reminisced. They’d also watched a documentary they filmed back in 2006 – Girls Aloud: Off the Record.

Kimberley also spoke about how she turned 40 in November. The singer said that she made a special effort to celebrate, as Sarah would have wanted her to “party”.

Sarah Harding would have turned 40 last month too. Kimberley paid tribute to her late friend on Instagram on what would have been her birthday.

“Today is a very strange day,” she wrote. “We have celebrated so many birthdays together over the years so this feels very surreal.

“I hoped with all my heart that we would be celebrating our 40th’s together too as we planned. You ALWAYS brought the party and I have spent today reflecting and reliving all the amazing memories we made.”

During the Royal Variety Show earlier in December, Sarah was honoured during the in memoriam segment of the show.

Many fans were left in tears as a short clip of Sarah performing at the Royal Variety in 2012 was shown.

Sarah revealed in August 2020 that she had breast cancer. Her mother, Maria, announced Sarah’s death on September 5, 2021.