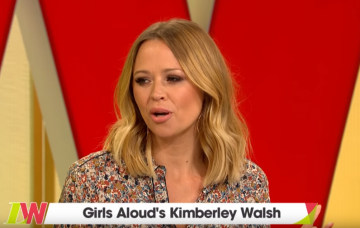 She also opened up about Cheryl's split from Liam Payne

Kimberley Walsh has opened up about her best friend Cheryl’s split from Liam Payne and how their sons enjoy playdates.

The former Girls Aloud singer appeared on Tuesday’s Loose Women and revealed Cheryl, 35, is “doing really well” but is finding it “tough” following the split.

Kimberley, 36, said she and Cheryl “get together all the time” because their children are around the same age.

When asked how Cheryl is doing since her recent split from singer Liam, Kimberley said: “It’s obviously tough, but she’s doing really well.”

Liam and Cheryl announced their split earlier this month, saying they “still have so much love for each other as a family” and want to focus on their one-year-old son Bear.

Kimberley, who is mum to sons Bobby and Cole, revealed she and Cheryl have been seeing a lot of each other recently.

She told the panel: “We’ve both got young boys the same age, so we get together all the time.

She said she and Cheryl are at a “new phase” in their lives and watching their children play together is “so lovely”.

Kimberley said her son Cole is “a little obsessed” with Bear. So cute!

She continued: “I think [Cole] thinks he’s the older one, even though there’s only three months between.

“He [Bear] was a baby for a while when Cole was already walking, suddenly they’re on an even keel.

“But Cole still thinks he needs to baby him. But it’s very cute.”

Earlier this month, Kimberley opened up to OK! Magazine about how she and Cheryl try to arrange playdates for their boys.

She said: “Cheryl and I do try and get the kids together. I wish we could do it more but it’s hard with both our schedules.

“But we do make the effort so that they have a strong connection, because when you’re friends you just want your kids to be friends!”

Meanwhile this month, Kimberley also hinted at the reason Cheryl and Liam may have decided to separate.

She said Liam’s jet-setting career and being in the public eye could have made things “hard” for the pair.

“When you have a baby your whole being and whole life changes and for her obviously having a relationship in the public eye just makes it even harder and his career obviously takes him out of the country for long periods so it’s hard.”

Do you have play dates with your children, your friends and their kids? Leave us a comment on our Facebook page @EntertainmentDailyFix and let us know.