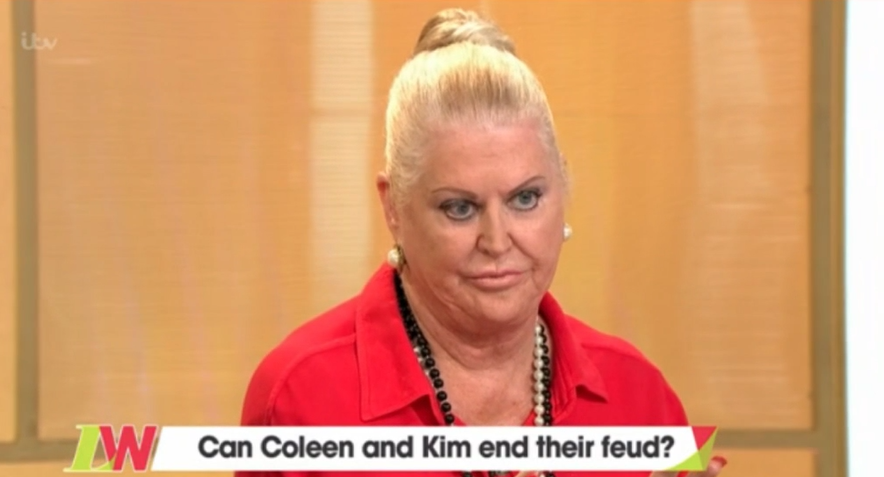 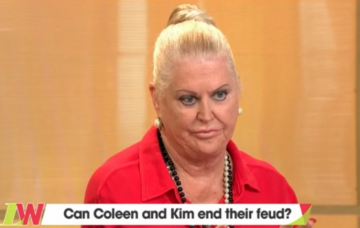 Coleen is taking a leave of absence from Loose Women

Kim Woodburn has said she hopes Coleen Nolan returns to work soon after she took a leave of absence from Loose Women following their TV row in August.

The two women had a ferocious falling out on Celebrity Big Brother last year and failed to resolve their differences during an awkward reunion on Loose Women this summer.

It was billed as a chance for them to bury the hatchet but it all went very wrong.

Kim, 76, ended up walking off set in tears, while Coleen, 53, was hit with accusations of bullying – which she vehemently denied – and subsequently took a break from all work commitments.

Read more: Coleen Nolan reveals her warning to This Morning

In an interview with New! magazine, Kim said: “I don’t wish her any harm and I’m sorry she has no job on Loose Women. I can say hand on heart, I didn’t cause it and I hope, in time, she gets back on her feet.”

Coleen does, though, have a job on Loose Women – it’s been made very clear she’s just taking a break and will be back on the show when she is ready.

More than 7,000 viewers complained about the Loose Women panel’s treatment of Kim during the interview, and Ofcom announced last month it’s investigating whether the programme “fell short of generally accepted standards.”

An upset Coleen broke down in tears on This Morning following the Loose Women interview as she spoke about the online abuse she’d received in the wake of Kim’s appearance.

It was then announced Coleen would be postponing her debut solo tour, scheduled to kick off in January, and taking a break from Loose Women.

All of her Loose Women co-stars have said they miss her on the show and are looking forward to when she comes back.

Linda Robson, 60, told Mail Online: “She was deeply upset about what happened. Please God she comes back soon, we all miss her. It’s her choice, we all want her back. The audience, every day they ask where she is, when she’s coming back. She’s got horses, she’s enjoying herself with her kids.”

She added that while everyone wants Coleen back soon, they are fully understanding of her situation and don’t want her to rush back before she is ready.

Linda isn’t the only Loose Women panellist to have spoken out in support of Coleen recently.

Nadia Sawalha told the Daily Star last month: “Everybody’s in contact with her. Everybody’s supporting her, and we can’t wait to have her back on the show.”

Coleen has not been seen in public since announcing her hiatus from work, but she did return to social media recently to share a motivational quote simply reading: “Change your thoughts, transform your life.”