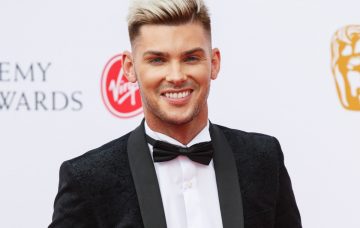 He already has two children with his hubby Carl Hyland

Kieron Richardson has revealed he’s ready to expand his family and try for baby number three.

The Hollyoaks star said he and husband Carl Hyland are excited to give their one-year-old twins Phoebe and Chase a sibling.

Speaking to Mirror Online at the British Soap Awards on Saturday, the 32-year-old made the revelation while discussing how “amazing” fatherhood is.

He told the publication: “They’re one now and we’re going again for baby three very soon, because it is hard, so we’d like to get it out the way, and our surrogate wants to get her life back.”

Kieron also spoke about how their twins are constantly changing and said their personalities have “reversed.”

The proud dad explained: “[Phoebe] used to be like the classic cute one and [Chase would] be independent and do what he wants, but now it’s reversed.

“She’s like the diva of the family and he’s the one being all cuddly and lovey-dovey, so they change every week.”

The couple, who tied the knot in 2015, welcomed their twins in May last year via a surrogate.

They then introduced their adorable tots to the world in an All 4 documentary.

At the time, Kieron said in the documentary: “I feel like I’ve got so much to celebrate right now. I’m a young man who’s openly gay, I’ve got a husband, and now I’ve got two children, twins.”

Kieron, who plays Ste Hay in Hollyoaks, shared a series of snaps from the twins’ birthday bash.

The first photo sees Phoebe and Chase both holding personalised crown ornaments with their names printed on them.

The infants were also treated to a magician, a delicious-looking cake each and a trolley of sweet treats.